Trump Follows Through With His Proposal To Arm Teachers 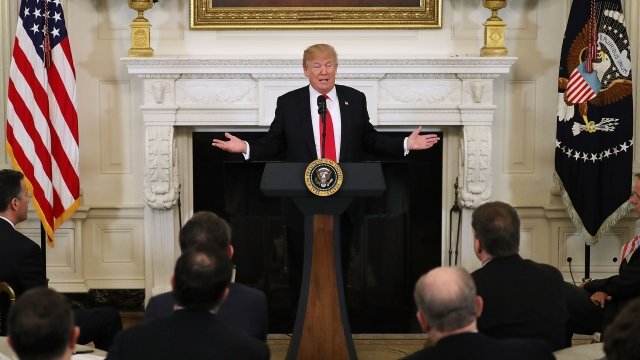 SMS
Trump Follows Through With His Proposal To Arm Teachers
By Katherine Biek
By Katherine Biek
March 12, 2018
One of the administration's school safety proposals includes setting aside federal funding to help provide "rigorous" firearm training to teachers.
SHOW TRANSCRIPT

President Donald Trump is following through with his proposal to arm teachers, and he wants to set aside federal funding to help provide "rigorous" firearm training to volunteers.

It's just one of several gun and school safety proposals the Trump administration unveiled Sunday night — a little less than four weeks after 17 people were killed in a school shooting in Parkland, Florida.

The proposals don't include raising the minimum age requirement to buy certain firearms. Trump previously said he'd support raising that age from 18 to 21 for semi-automatic weapons.

A senior administration official told reporters the age requirement is a "state-based discussion right now," but explained that it will still be explored by a committee Trump is forming to evaluate school safety. Education Secretary Betsy DeVos will head up that commission.

There's no exact date for when the committee will reveal its findings, but CNN reports it's expected to do so within a year.