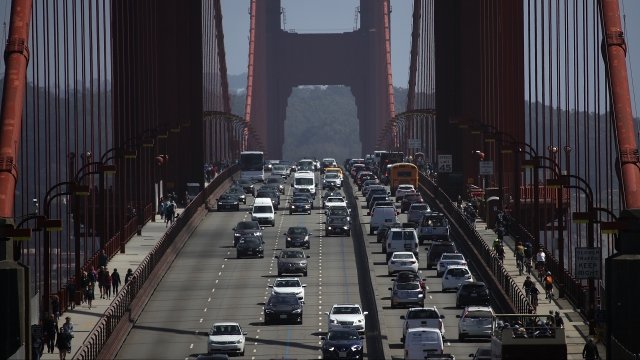 By Sebastián Martínez Valdivia
September 28, 2018
A new report projects a global temperature increase of 7 degrees Fahrenheit by the end of the century.
SHOW TRANSCRIPT

President Trump has repeatedly called the concept of human-driven climate change a hoax. Now, his administration says not only is warming real, it's so bad that some attempts to stop it are pointless.

That's the argument officials make in a lengthy report from the National Traffic Highway Safety Administration on fuel efficiency standards. A projection in the report estimates that global temperature will warm more than 7 degrees Fahrenheit by the end of the century.

Seven degrees Fahrenheit of warming is well above the point climate scientists say climate change would become disastrous, with rising sea levels and large scale droughts among the projected consequences.

Therefore, the report argues, freezing Obama-era fuel efficiency standards would have a relatively tiny effect. Those standards set a benchmark of 54.5 mpg by 2025. The Trump administration moved to freeze those standards in August.

The Washington Post points out this kind of 80-year assessment is unusual for a federal agency, which typically look at a program's impact during its lifetime.

Several states have challenged the Trump administration's regulatory rollbacks. On Friday, California regulators ruled automakers have to comply with the state's regulations when it comes to emissions, setting up a court battle with the White House.