US Makes It Harder For Americans To Visit Cuba 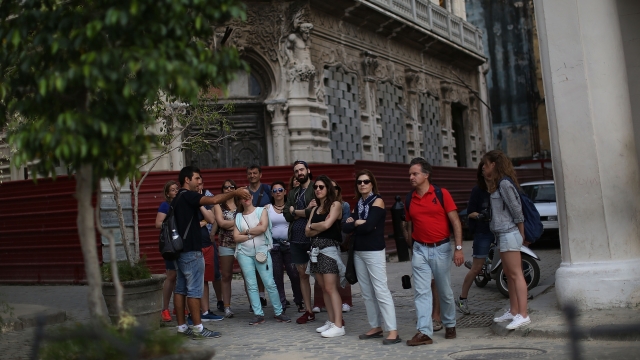 SMS
US Makes It Harder For Americans To Visit Cuba
By Katherine Biek
By Katherine Biek
June 4, 2019
The Treasury Department announced the U.S. is no longer going to allow a form of group educational travel called "people-to-people."
SHOW TRANSCRIPT

The Trump administration is making it more difficult for Americans to travel to Cuba.

Under new restrictions unveiled Tuesday, the Treasury Department announced the U.S. is no longer going to allow a form of group educational travel called "people-to-people."

That type of "people-to-people" license had allowed Americans to travel to Cuba in an organized tour group. Their itinerary just needed to consist of a "full-time schedule" of activities that involve interacting and engaging with the the local population.

The Treasury Department announced it's also going to start prohibiting private and corporate planes and passenger boats and ships from going to the Caribbean country.

In a statement, Treasury Secretary Steven Mnuchin said the new travel restrictions are a response to Cuba's "destabilizing role in the Western Hemisphere," including its support of Venezuelan President Nicolás Maduro.

Americans have not been allowed to travel to Cuba simply as tourists for decades — despite former President Barack Obama easing travel restrictions during his time in office. They can, however, visit Cuba so long as their travel falls under an approved category, such as visiting family, conducting government business or doing humanitarian work.