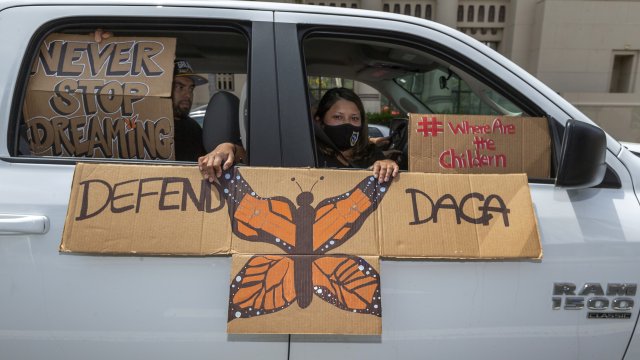 The Trump administration has fully restored a program that shields around 650,000 young immigrants from deportation, complying with a recent court ruling.

The Deferred Action for Childhood Arrivals program, known as DACA, is now open again to first-time applicants who've been unable to apply since 2017.

"I did start to gather my documents and get ready to apply," said Andrea Anaya, one of hundreds of thousands of undocumented immigrants who could benefit.

"If it means that I can have a job and support my family, it's absolutely worth it," Anaya said.

Anaya moved to the U.S. from El Salvador with her mother when she was 5. She turned 15 — the minimum age to qualify for DACA — right when President Donald Trump ended the program in 2017, and she missed out on the protection as a result.

"I was just kind of in the air just waiting for a solution: 'Am I going to finish college and not have any status and not be able to apply for a job?'" said Anaya.

For Anaya and other young immigrants, the program's reinstatement is a huge victory.

Yet they are also aware that their future remains uncertain — with more DACA litigation ongoing and with the Trump administration saying it may appeal the latest ruling.

"I've been afraid my whole entire life about DACA, about my immigration status, that it's to the point where what am I going to lose?" said Anaya.

The Trump administration has long argued that DACA is unconstitutional.

The program allows certain undocumented immigrants brought to the U.S. as children to live and work legally, but it doesn't grant them legal status.

President-elect Joe Biden has pledged to work with legislators on giving 11 million undocumented immigrants a path to citizenship.

But that's likely to be a tough sell for Congress.

In the meantime, Biden says he will expand DACA when he takes office but hasn't offered details yet. Immigrant advocates want him to broaden eligibility.

"There are so many other kids that could be eligible but are missing from a year or two," Anaya said.