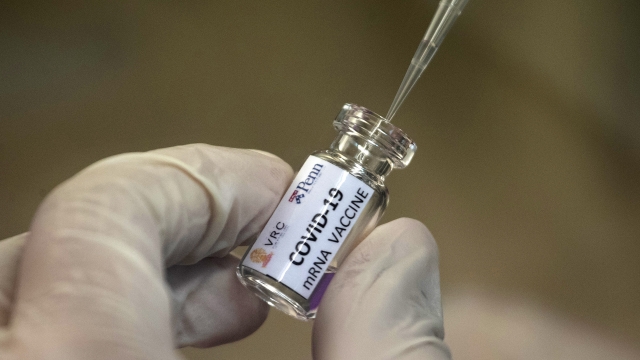 SMS
Trump Administration Looks To Deploy COVID-19 Vaccine By January
By Shira Tarlo
By Shira Tarlo
June 16, 2020
Officials say the vaccine's distribution will be tiered, with the most vulnerable Americans and essential workers getting it first.
SHOW TRANSCRIPT

The Trump administration task force working on developing a COVID-19 vaccine says it hopes to have some doses delivered as early as October, senior administration officials told reporters Tuesday on a conference call.

The vaccine development initiative, known as Operation Warp Speed, aims to more broadly distribute 300 million doses of the vaccine to Americans by January 2021 — a goal some scientists have called too ambitious and unrealistic.

The vaccine would be in limited supply. Officials say distribution will be tiered, with the most "vulnerable" Americans and essential workers getting it before the general public.

Officials say those vulnerable Americans who can't afford the vaccine and want it will get it for free from the government. Other Americans will have to wait to get a dose — and it’s unclear whether the vaccine will be free and, if not, how much it will cost.

Officials say private insurers have expressed interest in providing vaccines at no cost to customers but warn nothing is definitive at this point.

The administration says more than a dozen vaccines are in development — some already in clinical trials — and it plans to narrow that list to about seven of the most promising candidates.

Notably, the vaccine will be in key development stages this fall — at the height of the 2020 presidential election — and some lawmakers have expressed concern that the vaccine approval process could be highly politicized.

Another worry: that the government's fast-track production and testing of an experimental vaccine will fuel new fears about vaccines.

And still in question: when we’ll learn which vaccines work, how the government plans to distribute them and how much it will cost Americans.