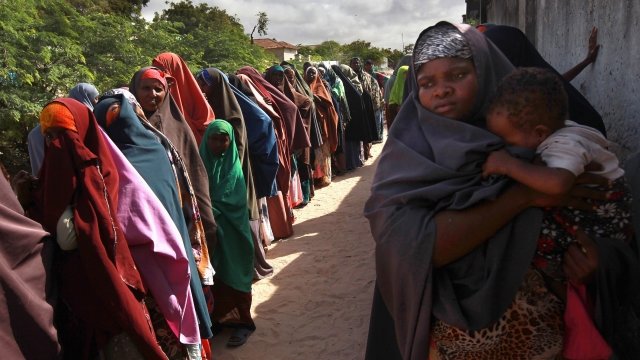 SMS
Trump Administration Extends Protection For Somali Immigrants
By Caitlin Baldwin
By Caitlin Baldwin
July 20, 2018
The Department of Homeland Security is extending the TPS designation for Somalis living in the U.S.
SHOW TRANSCRIPT

The Trump Administration is extending the Temporary Protected Status designation for Somalia.

TPS was created to protect immigrants that fled to the U.S. due to an environmental disaster, ongoing armed conflict or other extraordinary circumstance back home. Those under the designation are granted temporary protection from deportation and allowed work permits.

According to the Department of Homeland Security, there are around 500 Somalis currently in the U.S. under that protection, but their status was set to expire in September.

Secretary of Homeland Security Kirstjen Nielsen said the decision was made after reviewing the "ongoing armed conflict and extraordinary and temporary conditions"in Somalia.

Somalis in the war torn country are facing religious persecution, targeted attacks on civilians and famine.

Somalis that already have the status can now re-register for an additional 18 months of protection.