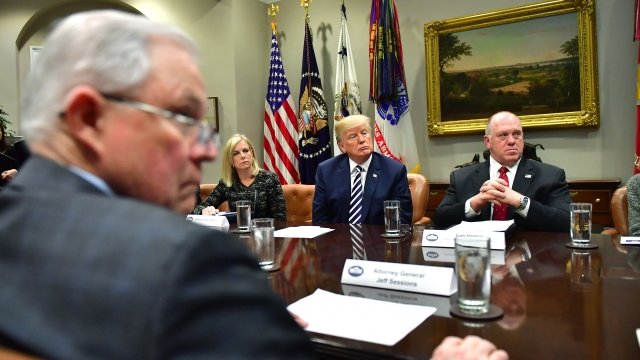 Not surprisingly, the Trump administration is lauding the Supreme Court's ruling in favor of the controversial travel ban.

"The fact that today's Supreme Court ruling just coming out, a tremendous success ... We just have to know who's coming here. The ruling shows that all of the attacks from the media and the Democrat politicians ... all turned out to be very wrong," President Donald Trump said before a meeting with congressional leaders.

In a statement, Attorney General Jeff Sessions called the ruling "a great victory for the safety and security of all Americans," and the Department of Homeland Security reaction called the executive order that created the ban an important step "to protect the American people by allowing for the proper review and establishment of standards to prevent terrorist or criminal infiltration by foreign nationals."

But opponents of the travel ban were quick to express their disappointment with the decision.

"Make no mistake: The Supreme Court has endorsed bigotry and Islamophobia. That's what they did. And they greenlit prejudice coming from this White House. They really sent a message to the world that yes, fear trumps fact," said California Democrat Rep. Barbara Lee.

"I don't agree with the Supreme Court ruling, but to categorically brand people because of their religion or their background or country they're from is just not the way we should do things in America," Sen. Dick Durbin said.

The Supreme Court's ruling applied to the third version of the travel ban, which broadly suspends travel for people from Iran, Libya, Syria, Yemen, Somalia, North Korea and Venezuela.