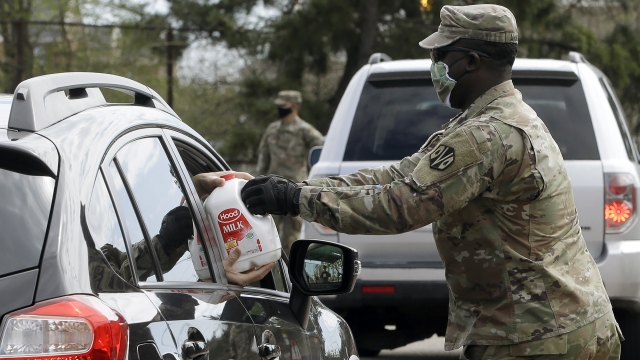 The Trump administration has ordered the National Guard to end deployments of members helping states fight the coronavirus. Their deployments will end on June 24 — just one day before thousands of members would be eligible for benefits.

More than 40,000 National Guard members across the country are assisting with testing for COVID-19 and setting up field hospitals. According to The Hill, ending their deployment would leave many of those members with only 89 of the 90 days of service required to qualify for early retirement and education benefits.

Politico reports that the decision was outlined by a senior FEMA official on May 12 during an interagency call. According to the outlet, the National Guard response to the coronavirus has been the largest domestic deployment since Hurricane Katrina in 2005.

The federal government is covering the cost of the National Guard's coronavirus efforts, which can cost up to $9 million per month per 1,000 troops mobilized, according to the National Conference of State Legislatures.

The decision to end the deployments is catching backlash from lawmakers.

On Twitter Tuesday, U.S. Rep. Max Rose wrote: "This is beyond [foolhardy] and short-sighted. Intentionally ending National Guard deployments one day before the 90-day mark is a kick in the gut to those who have put their lives on the line for our country."

Meanwhile, Politico reports states like Washington are expressing concern about the gap that will be left on the front lines when the deployment ends. According to Johns Hopkins University, more than 1.5 million cases of the coronavirus have been recorded in the U.S.