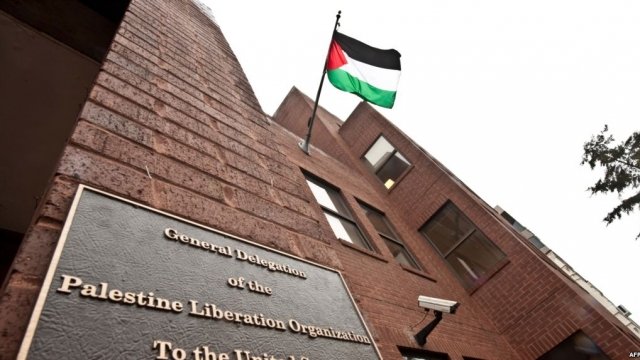 By Katie Cammarata
September 10, 2018
The Trump administration said the office is closing because of attempts to get International Criminal Court to investigate the U.S. and Israel.
SHOW TRANSCRIPT

The Trump administration will close the office of the Palestine Liberation Organization in Washington, D.C.

White House national security adviser John Bolton said that's because of concerns over Palestinian efforts to get the International Criminal Court to launch investigations into Israel.

Bolton said: "The United States will always stand with our friend and ally, Israel."

A Palestinian delegate to the U.S. condemned the move in a strongly-worded statement on Monday.

The decision comes after the Trump administration announced it would cut an additional $25 million in aid meant to help cover medical costs for Palestinians.

Closing the organization leaves no official Palestinian presence in Washington.

Bolton also threatened that the U.S. would impose sanctions against the International Criminal Court if it continues with investigations into the U.S. and Israel. He also said the Trump administration would ban ICC judges and lawyers from entering the U.S.