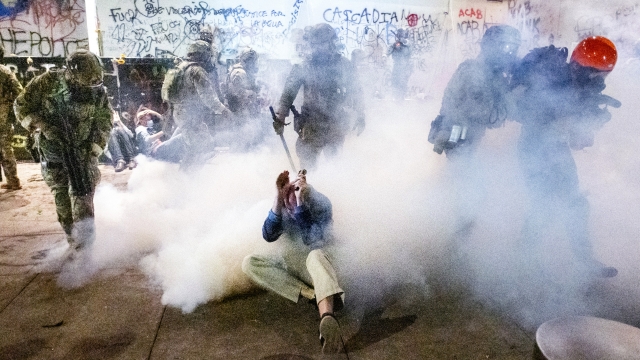 The Trump administration is standing firm in its decision to send over 100 federal agents to Portland, Oregon. Acting Homeland Security Chief Chad Wolf said Tuesday the agents "will not retreat."

At a press conference, Wolf said: "My message is very simple: If you're looking to peacefully protest in Portland, the department respects your right to do so. Please do so away from the violent activity that's taking place near the courthouse on a nightly basis for your own safety. If you are a violent rioter looking to inflict damage to federal property or law enforcement officers, you need to find another line of work."

Critics say the federal policing is reinvigorating protests sparked by the death of George Floyd in May.

DHS says it is deploying officers to Portland to protect the city's federal courthouse, which falls under its legal duties. In the wake of Floyd protests, DHS created a new task force federal officials said was to "protect American monuments, memorials, and statues."

President Trump has injected politics into the situation, declaring the federal agents are needed to settle unrest in urban areas he says are, quote, “All run by very liberal Democrats."

The administration has vowed to send more agents to cities, but is facing multiple lawsuits questioning the authority to do so.