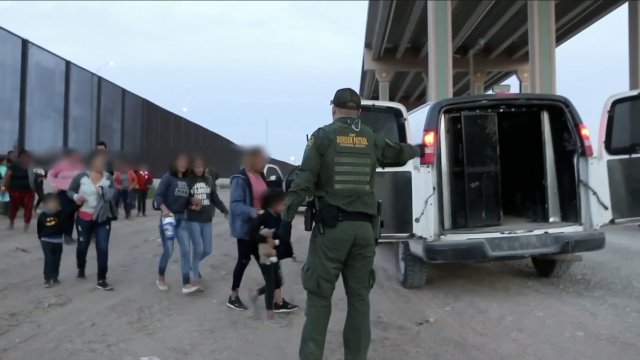 SMS
Trump Administration To Expand DNA Collection Of Migrant Detainees
By Lauren Magarino
By Lauren Magarino
October 3, 2019
The expansion was inspired by a pilot program, fueled by a whistleblower complaint and put into action by using an older law.
SHOW TRANSCRIPT

The Trump administration is gearing up for an expansion, allowing it to widely collect the DNA of migrants in U.S. custody. Two senior officials at the Department of Homeland Security spoke about the expansion on the condition of anonymity. Here's how they said it'd work:

The administration currently operates a pilot DNA program. It uses rapid DNA collection to find links of parentage between migrants. The goal is to spot what the agency calls "fraudulent family units." These are cases where adults falsely present children as their own to access special protections.

The expansion was inspired by the pilot program, and fueled by a whistleblower complaint.

According to an August letter from the Office of Special Counsel to the White House, the complaint alleges Customs and Border Protection of not collecting DNA to the full extent of the law.

The law the whistleblower refers to is called the DNA Fingerprint Act of 2005. It allows DNA collection from any detained person, but in 2010 Homeland Security Secretary Janet Napolitano requested an exemption for immigrant detainees without criminal charges or waiting to be deported.

One official said the exemption no longer applies, allowing the law to once again serve as a vehicle for not only Homeland Security, but ICE and CBP to pull a comprehensive DNA file from detained migrant adults and children.

The DNA data will go into the FBI's Combined DNA Index System, or CODIS. States and law enforcement authorities use it to identify criminal suspects. The change has sparked several ethical questions, including those around privacy. A staff lawyer with the ACLU's Speech, Privacy and Technology Project said, "That kind of mass collection alters the purpose of DNA collection from one of criminal investigation basically to population surveillance, which is basically contrary to our basic notions of a free, trusting, autonomous society."

Officials said immigration agents would be trained to handle DNA testing with privacy rights in mind. They also said a group is figuring out when to roll out the new rule. Its goal is as soon as possible.