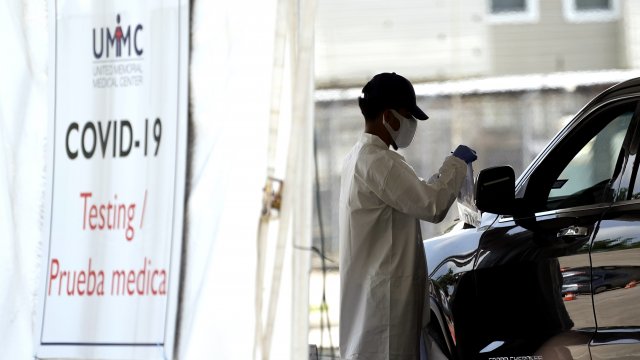 The Trump administration is reportedly trying to block $25 billion for coronavirus testing and tracing in an upcoming stimulus relief bill.

The Washington Post says the White House is also trying to stop GOP senators from allocating $10 billion to the CDC and other funds to the Pentagon and State Department to fight the virus.

The Trump administration argues there is no need to add more money because funds from other relief packages haven't been used. Capitol Hill Republicans are pushing back though, saying the suggestion is tone deaf as case numbers continue to rise across the country.

The Post reports that instead of allocating the funds to testing and CDC funds, the administration is trying to use the coronavirus relief package to fund unrelated projects, like a new FBI building.

The White House has pushed for states to own the responsibility for testing, not the federal government. President Trump has openly argued against widespread testing, saying the number of infections would be lower if the country performed fewer tests.

Negotiations have kicked into overdrive as the bill is expected to be unveiled later this week.

The bill comes as the majority of states have seen increasing case numbers. Only nine states have the virus under control and just three are on track to contain it.