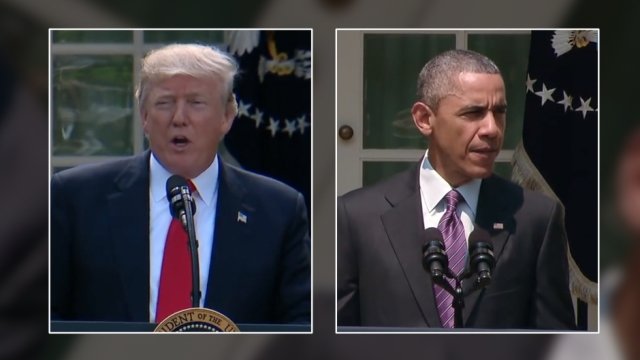 President Donald Trump has accused his predecessor of collusion or obstruction for his handling of intelligence that Russia interfered in the 2016 presidential election.

In a series of tweets Monday morning, Trump said former President Barack Obama "did NOTHING" after receiving a report from the CIA in August.

The report, detailed in an article published Friday by The Washington Post, is said to have included "specific instructions" from Russian President Vladimir Putin on the goals of the cyberattack.

An unnamed former senior Obama aide told the Post, "I feel like we sort of choked" on responding to the attack.

Former Homeland Security Secretary Jeh Johnson told the House intelligence committee last week that the administration was concerned a public acknowledgment would appear to be "challenging the integrity of the election process itself."

The administration did put out a statement on Oct. 7, stating it was "confident that the Russian Government" was behind the hacks. The statement came out the same day the infamous Trump "Access Hollywood" tape was published.

It's part of a broader measure that would enforce new sanctions against Russia and strengthen existing ones.

In his tweetstorm Monday, Trump said Obama expected Hillary Clinton "would win" and Obama "didn't want to 'rock the boat.' He didn't 'choke,' he colluded or obstructed and it did the Dems and Crooked Hillary no good."

Trump has repeatedly called the investigation into whether any members of his campaign colluded with Russia a "witch hunt."

In a tweet Monday morning, Trump said the Russia investigation has turned up "zero 'tapes' of T[rump] people colluding. There is no collusion and no obstruction. I should be given apology!"

His tweets appear to acknowledge the Russians tried to meddle in the election. In recent months, Trump hasn't appeared to be totally convinced Russians were behind hacking attempts.

"You don't think it's phony that they, the Russians, tried to meddle in the election?" John Dickerson, host of CBS' "Face the Nation," asked in an April interview.

"That I don't know," Trump replied. "... If you don't catch a hacker, okay, in the act, it's very hard to say who did the hacking. With that being said, I'll go along with Russia. Could've been China, could've been a lot of different groups," Trump said.

"I want to find out if there was a problem with an election having to do with Russia or by the way, anybody else. Any other country," Trump told NBC's Lester Holt in May.