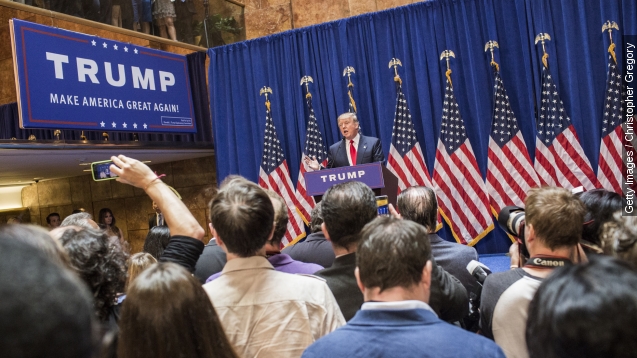 SMS
Trump Accused Of Planting Paid Actors In Announcement Crowd
By Ryan Biek
By Ryan Biek
June 18, 2015
Donald Trump has been accused of having paid actors attend his presidential announcement, though there's little evidence to support the claim.
SHOW TRANSCRIPT

Donald Trump is facing accusations that he paid actors to cheer him on at his presidential announcement Tuesday.

The Hollywood Reporter says it has a copy of a casting-call email sent from a New York-based agency, offering $50 to background actors for less than three hours of work.

The email says, "We understand this is not a traditional 'background job,' but we believe acting comes in all forms and this is inclusive of that school of thought."

When asked by The Hollywood Reporter, the casting agency denied sending that email but wouldn't comment further. Angelo Carusone, who many media outlets call an anti-Trump activist, first made the allegations after seeing a man's Instagram post from the event online.

"He uses social media to post pictures of himself at gigs –– which makes perfect sense –– and I recognized him as an actor, so I started to do a little digging and discovered that the other person featured was an actress as well," Carusone told MSNBC.

However, MSNBC reported in its own investigation no person has said they were paid to be there. So again, the only evidence is the alleged email posted by The Hollywood Reporter.

Trump's not the only candidate to be accused of doctoring support. In April, Hillary Clinton held what her campaign called an unscripted roundtable discussion in Iowa, yet a man told the Daily Mail it was staged and the campaign staff even drove him to the location.

This practice candidates are accused of is known as "astroturfing," playing on the idea of fake grassroots activism. The claim probably won't help Trump's image. CNN reports recent polls show more than half of Republicans said they think negatively of him.