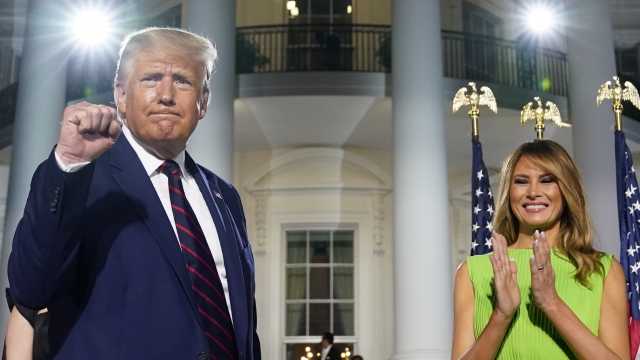 "In a new term as President, we will again build the greatest economy in history – quickly returning to full employment, soaring incomes, and record prosperity," President Donald Trump said.

In a high-stakes speech to cap off the fourth night of Republican National Convention, President Donald Trump pledged to overcome the coronavirus pandemic that has crippled the U.S. economy, and continued to take sharp aim at his Democratic opponent.

"We have spent the last four years reversing the damage Joe Biden inflicted over the last 47 years," Trump said.

A historic and yet controversial first, the President accepted the nomination from the White House where he addressed Hurricane Laura recovery efforts and ongoing unrest in Kenosha, Wisconsin and other American cities -- harping on the conventions main theme of law and order.

"In the strongest possible terms, the Republican Party condemns the rioting, looting, arson and violence we have seen in Democrat-run cities like Kenosha, Minneapolis, Portland, Chicago, and New York and many others," Trump said.

Issues such as criminal justice reform were also a focal point with a speech by Alice Johnson, a former inmate who received a commuted sentence from President Trump.

We also heard from members of Congress like Senate Majority Leader Mitch McConnell and HUD Secretary Ben Carson who built on another of the conventions major themes: the president's views on race.

"Many on the other side love to incite the vision by claiming that President Trump is a racist. They could not be more wrong," Carson said.

"I recognize that my dad's communication style is not to everyone's taste. And I know his Tweets can feel a bit... unfiltered. But the results speak for themselves," Ivanka Trump said.

The official election season is now under way with just weeks to go before Americans in a handful of states are able to cast their ballots early. The President and Vice President will campaign almost immediately and Democratic nominee Joe Biden will do a bit of campaigning of his own after Labor Day.