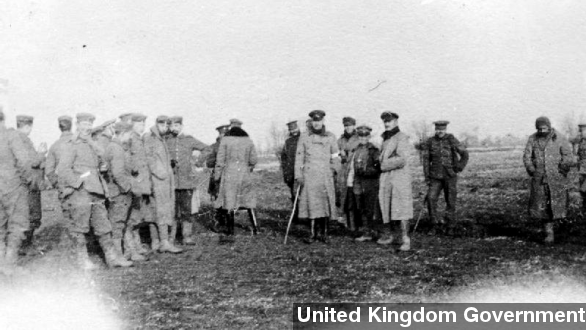 A hundred years ago, during one of the bloodiest wars the world had ever seen, soldiers along the front lines put down their rifles, stepped out of the trenches and celebrated Christmas. (Video via U.S. National Archives)

The Christmas Truce, as it's come to be known, is remembered through letters and photographs from the front, like this one — which shows German and British soldiers meeting in No-Man's Land in France.

The truce, during World War I has since been commemorated in a number of ways, but one of the most popular is through soccer games.

That's because one of the most popular stories about the truce has to do with a soccer game between British and German soldiers, played in No-Man's Land. (Video via Budweiser)

That story has been used in videos like this one from the European soccer governing body UEFA, as an example of how the sport can unite people. (Video via UEFA)

And Prince William, the president of the English football association, even unveiled a monument to the game at the National Memorial Arboretum earlier this month. (Video via ITN)

And companies like Sainsbury's, which produced this ad, have used the game in advertisements around this time of year. (Video via Sainsbury's)

But some historians have doubted the accuracy of that story, citing evidence of games among British soldiers, but not an organized game between soldiers from opposing sides.

This article from The Independent argues soccer bodies have pushed to publicize the game for their own interests, and alleges even back then, "the sport was used as part of the propaganda effort to get men out to the front."

There's no united front from historians though, and as the Smithsonian points out, there are eyewitness accounts from soldiers who say there was a game between Scottish and German troops, although, "The real game was far from a regulated fixture with 11 players a side and 90 minutes of play."

What historians do generally agree upon is in pockets along the line that stretched from Switzerland to the North Sea, German and British troops left their trenches to exchange cigarettes, and bury their dead among other things.

The conflict only intensified after the truce however, with officers strictly enforcing orders to not fraternize with opposition soldiers, and the deployment of poison gas driving up the number of casualties. (Video via British Forces Broadcasting Service)

The Christmas Truce happened early on in the war, but it has remained one of the most enduring memories of what would become one of the deadliest wars the world has ever seen.

A World War I veteran told the BBC, "We heard them singing Silent Night — Stille Nacht — I shall never forget it. It's one of the highlights of my life. I thought, what a beautiful tune."