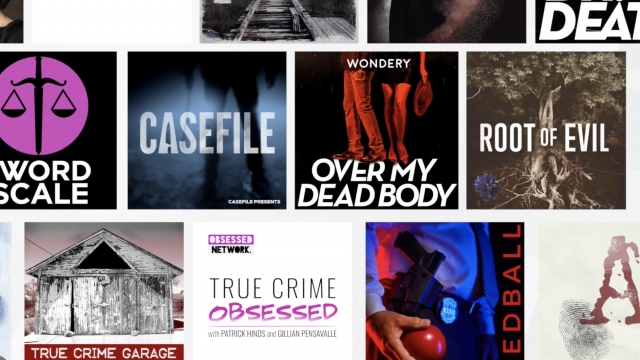 SMS
True Crime Is Having A Big Moment — Especially Among Women
By Casey Mendoza
By Casey Mendoza
February 27, 2020
Wondering why so many true-crime series are coming out now? Newsy chatted with Natasha Del Toro, the host of the podcast "Verified," to learn more.
SHOW TRANSCRIPT

"Since the launch of the podcast 'Serial.'"

"I didn't think all of these people would care."

"I didn't have anything to do with the crime."

We're in the middle of a true-crime renaissance. With high-profile series like Amazon Prime Video's "Lorena," Netflix's "Don't F--- With Cats" or HBO's "Leaving Neverland," fans of the genre will always have something to binge-watch.

Just five years after Netflix released "Making A Murderer" — its first original series in the genre — the streaming company now has more than 50 original true-crime titles on its platform. Seventeen of those were released just last year.

In the podcast world, fans have access to even more — literally hundreds of series. And new ones are debuting every day.

According to the analytics company Podtrack, six of the top 10 new podcasts from 2019 were true-crime titles. And of the top 100 true-crime series on iTunes, more than half debuted in the past three years.

"I think some part of it is that we really like to be scared. There is a sort of thrill factor to it, but also, I think part of it — and this is where I think women in particular are really drawn to true-crime stories — we are more likely to be the survivors or victims of crime."

The first season of the new series debuted in February and tells the story of a group of women from around the world bringing a sexual predator to justice. For some of the women involved in the story, true crime isn't just entertainment — it's a resource for survival.

"These stories become like cautionary tales or almost like a public service announcement. And I know, actually, funnily enough, one of the women in our story, and I don't want to give too much away. So, no spoiler alerts here, but one of the women in our story who was in situation with a sexual predator of our story, she said she knew what to do, in terms of preserving evidence, because of watching true-crime stories."

Even before the recent true-crime boom, experts have noted women's draw to stories about murder and violence — especially if the victim or survivor is female.

The hosts of the podcast "Wine and Crime" said in 2018 that 85% of their audience is female. And for the past two years, women reportedly comprised around 80% of "CrimeCon" attendance.

Some critics consider the popularity of the genre a "double-edged sword," because while the stories can raise awareness about safety, an overconsumption of true crime could also normalize the oftentimes gruesome and violent crimes themselves.

This is especially true when you consider how often true-crime stories center their narratives around the criminals — portraying women primarily as victims.

"We weren't just doing a profile of a criminal mind, which can obviously be very interesting. But that's not — that wasn't our main goal here. Our main goal was to give a platform for these women to tell their stories, to amplify their voices, because what they did is truly incredible."

The podcast "Verified" is produced by Stitcher and the Scripps Washington Bureau. Both Stitcher and Newsy are owned by E.W. Scripps.