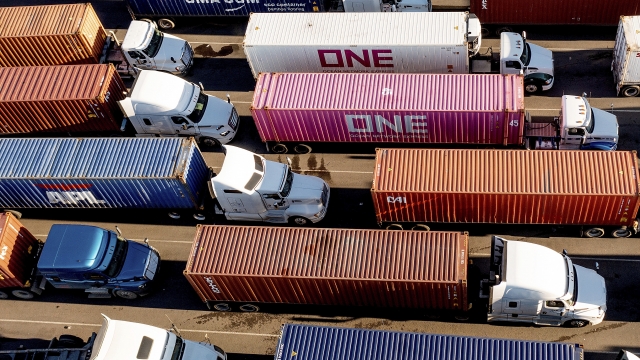 We're two years into a crisis that has upended global supply chains.

One of North America's busiest ports and the main throughput from Asia to the U.S. is finding its footing in a new normal.

Gene Seroka is the executive director for the Port of Los Angeles.

It's a dramatically different story from late last year, when an overrun port had cargo ships waiting at sea, while empty containers stacked up on open terminals.

The number of so-called "empties" is still 8% higher than last year.

Now another obstacle, as truckers organize work stoppages over a proposed state law that would limit the use of independent contractors, instead requiring drivers like them to be employees of a company.

Many truckers operate independently and would prefer to remain independent.

"Truckers are so critical to this supply chain. And we've got to make sure that we're setting the conditions to take care of them to the best of our ability," Lyons said.

The port has so far been able to hold off on charging shipping companies that leave containers sitting in the port; a threat that lit a fire under staff-strained shippers last fall.

"We're gonna keep every tool in our kit possible to make sure that we leverage and push the cargo and everything we need to do. And if the container dwell fee needs to be there for consideration, it will remain," Seroka said.

But the port is still struggling to get more trains to carry the goods out of southern Los Angeles.

"We now have more than 29,000 rail containers on our docks. That number should be more in the 9,000 unit range. Rail cargo is sitting an average of seven and a half days. This should be two days of dwell time," Seroka said.

"Trust me this isn't an issue that the rail companies are not working, they are. They have some significant challenges generating some of the capacity they need to generate," Lyons said.

And the clock is ticking as a busy 2022 shows no signs of slowing down.