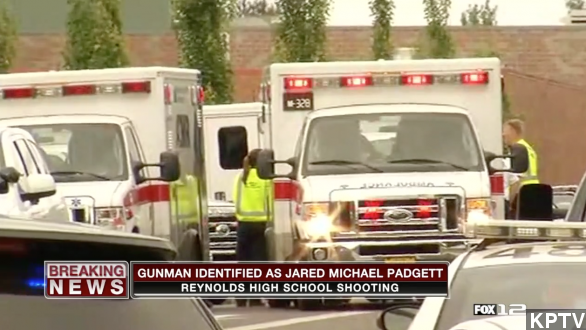 By Christian Bryant
June 11, 2014
Troutdale police said 15-year-old Jared Padgett carried out the shooting at his high school with weapons and ammunition he got from home.
SHOW TRANSCRIPT

Oregon authorities identified the Reynolds High School shooter in the city of Troutdale Wednesday, also revealing that he was a student and was heavily armed when he entered the school.

"The shooter is identified as 15-year-old Jared Michael Padgett. He carried an AR-15-type rifle, a semi automatic handgun, ammo and a large knife. He got the weapons from his family's home where they were locked up." (Via KGW-TV)

Authorities said during a press conference Padgett, a freshman at the school, was wearing a non-bullet proof vest meant to carry ammo and also carried hundreds of rounds of ammunition in a guitar case and a large duffel bag. (Via KPTV)

After entering the school, Padgett made his way to the men's locker room where he shot and killed 14-year-old Emilio Hoffman, who was also a freshman at Reynolds. (Via CNN)

Troutdale police said they have no reason to believe Hoffman was targeted and haven't been able to establish a link between the victim and his killer.

"Rispler was shot at and a bullet grazed his hip. He was hurt, but he was able to make it to the office and initiated a school lockdown."

"I cannot emphasize enough the role Mr. Rispler and the responding officers played in saving many, many lives yesterday." (Via The Oregonian)

Padgett later confronted police and died from a self-inflicted gunshot wound. Troutdale police told reporters they don't know of a motive but are still investigating the shooting.