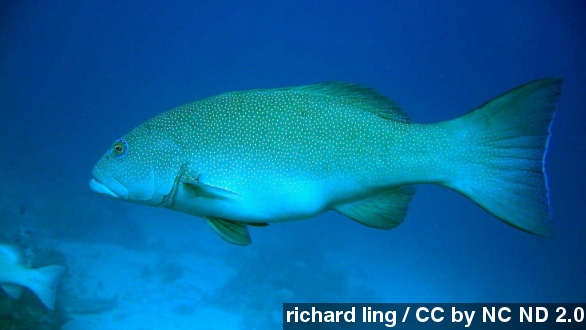 By Briana Koeneman
September 9, 2014
According to a new study, trout could be just as clever as chimps when it comes to finding hunting partners to help them get their fins on some food.
SHOW TRANSCRIPT

As it turns out, trout could be as clever as chimpanzees — at least, when it comes to choosing the best hunting partners to help them nab some grub.

According to a new study, coral trout not only solicit the help of moray eels to improve their chances of getting their next meal, but they also are pretty picky when it comes to choosing the best eel for the job. (Video via YouTube / huntingnq)

Wired quotes Alex Vail, one of the researchers involved in the study. "Prior to our study, chimpanzees and humans were the only species known to possess both of these abilities. I think the evidence is mounting that fish have more going on in their heads in terms of cognition than they have been given credit for."

To investigate this behavior a little more closely, the researchers decided to mirror an experiment that was originally conducted on chimpanzees back in 2006.

In that experiment, one chimp had to free another from a cage so they could both tug on a rope together and release food that couldn't be reached by just one chimp's efforts. (Video via BBC)

The chimps were able to figure out when they needed help getting to the food and when they didn't — an assessment that, until then, was considered to be unique to humans.

So, in the adapted version of that chimp experiment, researchers placed coral trout in an aquarium containing a decoy moray eel and a frozen baitfish.

Sometimes, the researchers left the baitfish out in the open, and other times, they hid it in a crevice. And just like the chimps, the trout learned only to employ the help of the fake eel when they really needed it. (Video via Alex Vail)

An evolutionary anthropologist who worked on the original chimpanzee study told Wired he thinks these new findings are "exciting" and that they challenge the idea that "only animals that look like us can be smart."

In fact, dozens of studies conducted over the years have found that fish are indeed intelligent — there's evidence that they can use tools and that they have impressive long-term memories and sophisticated social structures.

But the study's authors say they still don't know exactly what's going on inside the trouts' brains when they join forces with eels to get their fins on some food.

They could be thinking along the same lines as us when we cooperate with other human beings, but it's possible they have a different thought process all together. (Video via Australian Museum)

The study was published Tuesday in the journal Current Biology.