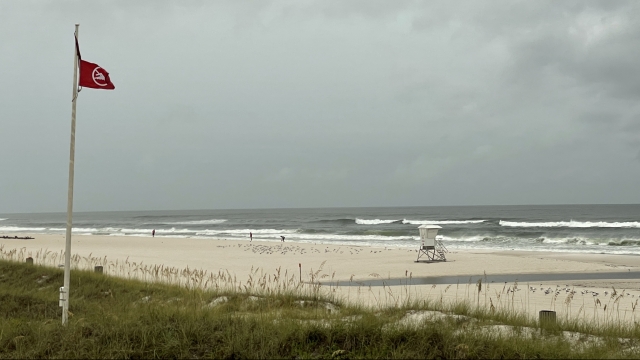 Fred's fury increased all day as the storm approaches the share. Its winds whipped up massive white caps.

Fred almost disappeared over the weekend, but it regained strength due to the warm Gulf waters.

Red flag warnings are up all along the Gulf Coast, telling tourists the water is off limits. No swimming. No wading. But surfers are chasing some of Fred's big waves regardless heading in with their boards.

"During the storm you get better surf," surfer Roman Shireley said. "Typically, it's knee high."

The rain is forcing most tourists to stay inside their hotels and leaving the beach almost empty.

One family from Georgia is trying to enjoy their vacation as much as possible.

"It was too late to cancel when we found out it was coming," Rhonda Cantrell said.

Fred's powerful push is creating storm surge concerns. From Panama City Beach through Florida's Big Bend, there's up to 5 feet of storm surge. The storm could dump up to 8 inches of rain on the panhandle and almost seven inches inland as far as Atlanta, creating flash flood warnings.

Fred will quickly lose strength once it makes landfall but the real danger will be the inland flooding over the next few days.