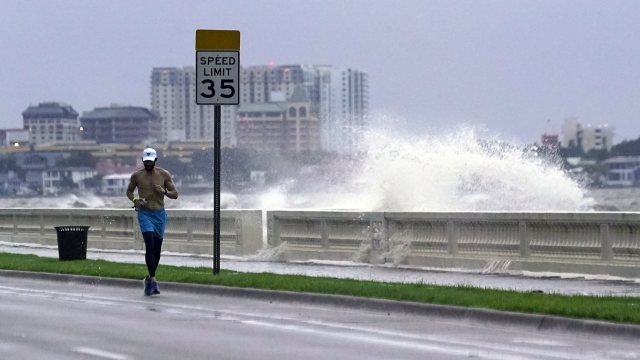 Fast-moving Tropical Storm Elsa lashed the New Jersey coast with high winds and soaked New York City as it churned up the East Coast on Friday.

Elsa had maximum sustained winds of 50 mph forecasters said. Around 8 a.m. Friday, it was centered about 90 miles southwest of Montauk Point, New York.

Heavy rains were causing traffic hazards around New York City, which was already reeling from a deluge Thursday that flooded roads and at least one subway station. Up to 6 inches of rain was possible in some areas Friday.

The system was already blamed for one death in Florida on Wednesday. And Elsa also previously caused a damaging tornado in Georgia.

A tropical storm warning Friday morning stretched along parts of the East Coast from New Jersey to Massachusetts. Forecasters said Elsa was moving northeast at 31 mph.

The hurricane center said rainfall totals between 2 to 4 inches were expected through Friday for eastern mid-Atlantic states and into New England. Isolated totals up to 6 inches were possible. There was a risk of considerable flash and urban flooding.

The tropical storm was expected to cross over the Northeast by the afternoon and move over Atlantic Canada by the night and Saturday. No significant change in strength was expected during the day, and Elsa is forecast to become a post-tropical cyclone by Friday night.