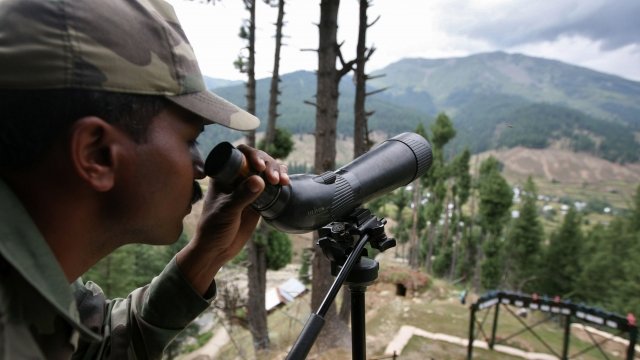 By Katherine Biek
August 17, 2017
Each country has a different idea of where the border is, so Chinese troops often cross into "India's side" and vice versa.
SHOW TRANSCRIPT

Chinese and Indian military troops reportedly clashed earlier this week in a disputed region in the Himalayan mountains.

India's PTI News Agency reports members of the Chinese People's Liberation Army tried to enter India along the banks of the Pangong Lake in the Ladakh region Tuesday. Both countries control parts of the lake.

India says its soldiers managed to push the Chinese troops back. The Chinese then reportedly threw stones at the Indian soldiers.

At the time, a spokesperson for the Chinese Foreign Ministry said it wasn't aware of the incident.

Neither side used firearms, and the situation didn't last long. But the incident does come as tensions are rising along the Chinese-Indian border.

The border stretches for more than 2,500 miles. The BBC reports each country has a different idea of where that line is, so Chinese troops often cross into "India's side" and vice versa.

The two countries are also engaged in a nonviolent standoff on a plateau farther east where the boundaries of China, India and Bhutan all meet.

That dispute started in June when China tried to build a road into a territory that both it and Bhutan claimed. The latter is a small country of fewer than 1 million people, so India gives Bhutan military support.

The specific plateau is also pretty vital to India because it overlooks a narrow stretch of land that connects India's northeast states with the bulk of the country.

India is reportedly concerned if China controlled that land — known as the Siliguri Corridor — it would cut India in two. The road China wants to build would put its troops much closer to that corridor.

China says it will only engage in diplomatic talks with India if Indian troops retreat from the plateau standoff. India says both sides should withdraw together.