'Trippy' Jimmy Fallon Explains How He Hurt His Other Hand 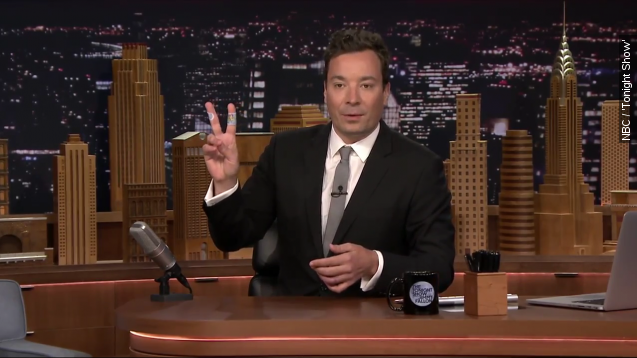 SMS
'Trippy' Jimmy Fallon Explains How He Hurt His Other Hand
By Ben Lawson
By Ben Lawson
October 27, 2015
Someone needs to put Jimmy Fallon in a bubble. Months after he seriously injured his left hand, the "Tonight Show" host hurt his other hand.
SHOW TRANSCRIPT

Someone needs to just put Jimmy Fallon in a bubble. The "Tonight Show" host almost severed his left ring finger this summer. And now, he's injured his other hand.

"This is the only Band-Aids we had in the house," Jimmy Fallon said on "The Tonight Show."

Fallon recently received the Elmer Award for Excellence in Humor from Harvard's prestigious humor magazine, the Harvard Lampoon. And while he was at the celebration, he tripped over someone.

"She knelt down, I didn't see her. This hand is already gone, so I just threw the bottle and landed on broken glass," said Fallon.

Ouch! But thankfully, a quick trip to the hospital showed there was no glass in his hand, and he's going to be fine. But seriously, it's time to start paying more attention to the world around you, Jimmy. Your daughter certainly doesn't seem impressed.

"Can you say 'Dada'?" Fallon's wife said in a cell phone video.