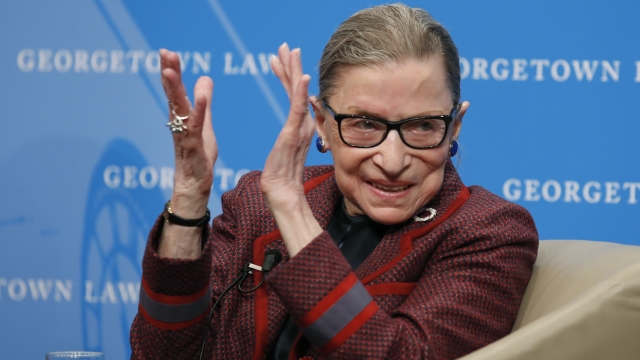 As the world learns of the passing of Justice Ruth Bader Ginsburg, women's rights advocates, celebrities, politicians and more are sharing their grief and offering condolences on the loss of the Supreme Court justice.

In an official statement, the president said, "Her opinions, including well-known decisions regarding the legal equality of women and the disabled, have inspired all Americans, and generations of great legal minds."

Former Vice President Joe Biden said, "Ruth Bader Ginsburg stood for all of us. She fought for all of us. ... May her memory be a blessing to all people who cherish our Constitution and its promise."

Biden's running mate, Senator Kamala Harris said, "For all who believe in the power of the law as a force for change, Justice Ginsburg was and always will be a titan."

Former President Barack Obama said: "Ruth Bader Ginsburg fought to the end, through her cancer, with unwavering faith in our democracy and its ideals. That’s how we remember her."

Justice Ginsburg's colleague, Chief Justice John G. Roberts, said: "We at the Supreme Court have lost a cherished colleague. Today we mourn, but with confidence that future generations will remember Ruth Bader Ginsburg as we knew her - a tireless and resolute champion of justice."

Throughout her career as an attorney arguing women's rights cases before the high court, and later in her 27 years as a Supreme Court Justice, Ginsburg was a champion for gender equality. She became a cultural icon and was affectionately dubbed the "Notorious RBG."

Former Secretary of State Hillary Clinton said, "Justice Ginsburg paved the way for so many women, including me. There will never be another like her. Thank you RBG."

Actress Mindy Kaling tweeted that Justice Ginsburg was "The kind of person who you say 'who knows, one day you could be HER'. I hope you rest well, RBG, you must have been tired from changing the world."

Actress Kerry Washington wrote, "Her rest is earned. It is our turn to fight."

President Bill Clinton appointed Ginsburg to the bench in 1993, making her the second-ever female justice on the Supreme Court. Justice Ginsburg died on Friday from complications of pancreatic cancer. She was 87 years old.