Tribute To Fallen Marine Given To Family After 9 Years 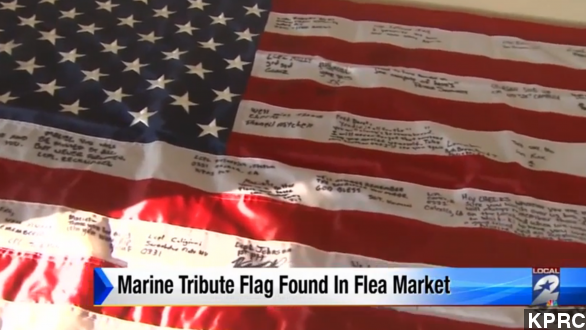 SMS
Tribute To Fallen Marine Given To Family After 9 Years

By Sebastian Martinez
July 27, 2014
The story of a tribute flag for a fallen marine that was returned to his family through Facebook is making the media rounds.
SHOW TRANSCRIPT

The story of a fallen Marine's mother being reunited with her son's tribute flag is picking up steam.

As KPRC reports, a family in Hemphill, Texas found a flag at a flea market, and realized it was a tribute flag to a fallen marine.

The flag was covered in messages of support for Patsy Maciel's son Fred, who was killed in Iraq in 2005. (Via KTRK)

The buyers of the flag, reportedly found Maciel through Facebook, and reached out to her to return the flag. (Via KHOU)

The story quickly spread on the internet before making it to national TV with The Today Show running the story on Sunday.

It's still not clear exactly how the flag ended up at the flea market but the KPRC reporter who worked on the story posted on Twitter that she heard the flea market's owner got the flag at an estate sale.

If this story sounds familiar, it's because using social media to reunite owners with lost items isn't uncommon.

A quick look around the internet shows they seem to pop up all the time. (Via Daily Mail, Yahoo, The Huffington Post)

In fact, stories of Facebook-enabled reunions are so not uncommon, Buzzfeed even put together a compilation of reunion stories.

From The Odyssey, thousands of years ago, to popular movies like Homeward Bound, people just seem to like hearing stories other people overcoming the odds to find their way home. (Via Jastrow / Public Domain, Buena Vista Pictures / 'Homeward Bound: The Incredible Journey')

Maciel was reunited with the flag, which she called a part of her son, on Saturday at the cemetery where he is buried.