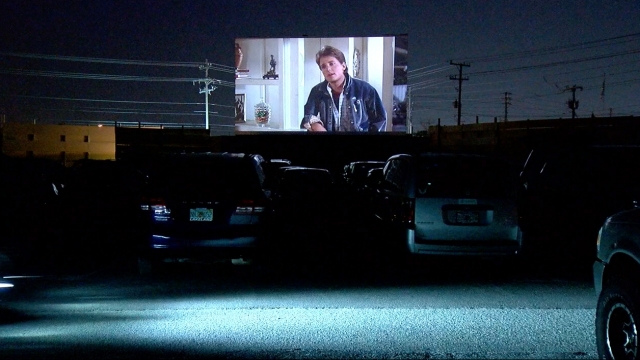 "There's been a real groundswell of support and the ticket sales have been spectacular."

Drive-in movie theaters carry a lot of nostalgia in the U.S.

But amid a global pandemic with calls for social distancing, they're now a safer alternative to watching films on the big screen.

Paula Weinstein: "There’s been a real groundswell of support and the ticket sales have been spectacular."

After the Tribeca Film Festival was postponed in April, organizers pushed for the month-long nationwide "Tribeca Drive-In."

Weinstein: "We thought of family movies. We thought of girls' night out movies — where we would have 'Girls Trip' and 'Mean Girls' — and we wanted comedies. At this moment, it’s important we laugh."

Every weekend in July, in venues like the Rose Bowl Stadium in California or AT&T Stadium in Texas, the Tribeca Drive-In will show more than 30 films — including the 45th anniversary screening of "Jaws" and the premiere screening of the documentary "John Lewis: Good Trouble."

To help put the events together, each venue is also hiring around 200 workers and reaching out to local restaurants to provide concessions.

Weinstein: "We really wanted to bring an economic development side to this for the communities."

Several Tribeca Drive-In events are already sold out — but they aren't the only ones finding success during the pandemic. There are more than 300 dedicated drive-in theaters in the U.S. alongside several pop-up theaters at other sports stadiums, empty pastures and even local restaurants.

Kal Dellaportas: "We just went live with tickets last night for Friday's event and they sold out in under a minute."

Chip Sawyer: "People that may not have thought about the drive-in for a long time are thinking about us, so it's really cool to see some new people here."

Weinstein: "We just wanted to remind everybody about going out of the house and seeing a film together — where your friends may not be with you, but they can be in the next car over and you can shout hello's in the safest of ways."