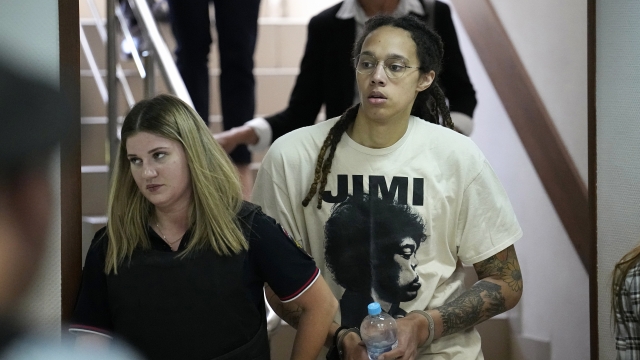 SMS
Trial Of Brittney Griner Underway In Russia
By Meg Hilling
By Meg Hilling
July 1, 2022
In May, the State Department reclassified Griner as wrongfully detained, shifting the case to the government’s hostage team.

The trial of WNBA star Brittney Griner for drug smuggling charges is officially underway in Russia.

The 31-year-old Texas native was arrested at a Moscow airport in February after Russian officials said they found vape cartridges with traces of hash oil in her luggage.

Her detention came days before Russia invaded Ukraine, with U.S.-Russian relations at a low point.

Following the start of court proceedings Friday, Brittney Griner's lawyers told press outside the courthouse that two prosecution witnesses had been called on that day, adding that "everything is going according to the plan, strictly by the book," without elaborating on any details from inside the courtroom.

"I wouldn't want to talk on the specifics of the case and on the charges and to comment our position on it because it's too early for it," Alexander Boykov, Brittney Griner's lawyer said. "So, I could only prove that we had two witnesses that are with the customs."

U.S. authorities in attendance stressed they were doing everything they could to bring the American home.

"I can assure you that the United States government at the very highest levels, is working very hard to bring Ms. Griner as well as all the wrongfully detained U.S. citizens safely home," Elizabeth Rood, U.S. Deputy Chief of Mission, said.

Initially, Brittney Griner's wife, Cherelle, and supporters kept a low profile in the hopes of resolving the situation quietly. But in May, the State Department reclassified the basketball player as wrongfully detained, shifting the case to the government's hostage team.

However, in an interview with CNN this week, Cherelle Griner expressed frustration with the U.S. government and how it's handled the case.

"I don't think the maximum amount of effort is being done because, again, the rhetoric and the actions don't match," Cherelle Griner said.

She went on to describe instances in which her wife placed calls to the U.S. Embassy, only to have those calls go unanswered.

"When you have a situation when Brittany can call our government, the Embassy, 11 times and that phone call don't get answered, you don't have my trust at that point," she said.

After more than 130 days in custody, Cherelle Griner says she is deeply concerned for her wife's wellbeing but wants her to hold strong.

"I told her, I said, 'I saw a picture, and honestly for a second I thought you was insane,'" Cherelle Griner said. "I was like, 'You know, I just want to tell you one thing.' I said, 'If you are losing your mind, just be gracious with yourself because you're human and that's okay and that way you come back, you know, we will love you back home.' And I said, 'If you aren't going insane, you know, just do me a favor and, you know, just try and keep whatever integrity you can control by not allowing them to depict you in ways that are not really, you know, your current state.'"

Brittney Griner's next court appearance is scheduled for July 7.