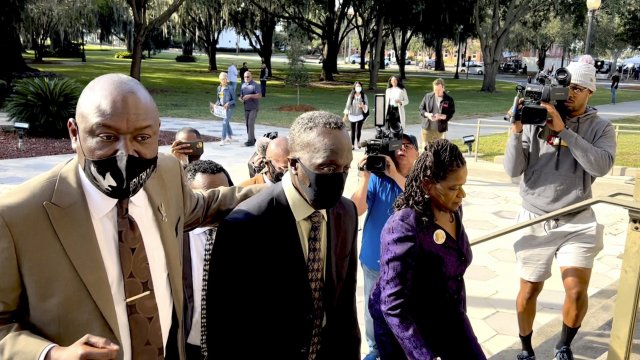 SMS
Trial In Ahmaud Arbery's Killing Begins In Georgia
By Jamal Andress
By Jamal Andress
October 19, 2021
The court plans to make its way through more than 600 jurors, going 20 at a time, in the first week.
SHOW TRANSCRIPT

In the small coastal town of Brunswick, Georgia, onlookers from far and wide gathered to demand justice for Ahmaud Arbery during the trial's first day Monday.

Inside the courtroom, the day started with legal jockeying over the questions jurors will be asked, then the first 20 jurors were sworn in and questioning began.

The court plans to make its way through more than 600 jurors, going 20 at a time, in the first week. Overall, the county sent out 1,000 jury duty notices in the trial of three white men charged in connection with Arbery's death.

Just to show how difficult picking an impartial jury could end up being, at one point during questioning, an attorney for Travis McMichael asked 20 potential jurors if they had "negative feelings about the defendants" — 12 people raised their hands.

When that first group was asked if anyone would like to serve on the jury, only one person raised their hand.

Still, outside of the courtroom, you can see how important this case is to this small Georgia community.

Arbery was out running when video shows men chasing him in pickup trucks before confronting him on the street.

Gregory McMichael and Travis McMichael say they suspected Arbery, a 25-year-old Black man, of committing a string of burglaries and so they attempted to detain him.

When Arbery fought back, the defense argues Travis McMichael fired his gun in self-defense.

The viral video for many Black Americans immediately evoked memories of past injustices that went unpunished, though this community is hoping for a different result.