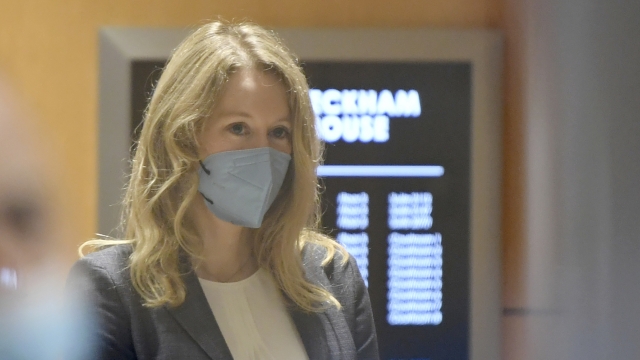 Opening statements are scheduled for Wednesday in the highly anticipated trial of Theranos founder Elizabeth Holmes, the fallen tech star accused of duping financial backers, customers and patients into believing that her startup was about to revolutionize medicine.

Holmes arrived at the courthouse amid a media scrum. If convicted by a jury, she could be sentenced to 20 years in prison — a stunning reversal of fortune for an entrepreneur whose wealth once was pegged at $4.5 billion.

That amount represented her 50% stake in Theranos, a Palo Alto, California, biotech startup she founded in 2003 after dropping out of Stanford University at the age of 19.

Theranos — a name derived from the words “therapy" and “diagnosis"— claimed to be perfecting a technology that could test for hundreds of diseases by extracting just a few drops of blood from a quick finger prick done at “wellness centers" across the U.S.

Holmes promised the samples would be tested in a specially designed machine named after famed inventor Thomas Edison. In her spiel, they would cost a fraction of traditional tests that require a doctor's referral and vials of drawn blood before lab processing that could take days to deliver results.

Holmes recruited an impressive board and raised nearly $900 million before Theranos' collapse, triggered by a series of explosive Wall Street Journal articles that revealed serious flaws in the company's technology.

The Journal articles spurred an inquiry by the U.S. Food and Drug Administration and a civil lawsuit filed by the Securities and Exchange Commission. The SEC case resulted in a $500,000 settlement without an admission of wrongdoing, but still proved to be the end of Theranos, which shut down in 2018.

Some of the company's wealthy investors, as well as former board members, are expected to testify during the trial. Holmes may take the witness stand, based on documents filed leading up to the trial.