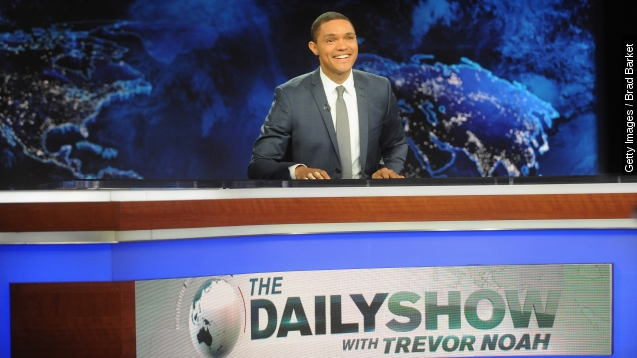 But a few cracks in his opening monologue didn't sit so well with his new audience.

"I'm saying the pope has a huge BLEEP. That was a joke," Trevor Noah said on "The Daily Show."

Yup, after paying tribute to his successor, Jon Stewart, Trevor launched right into some raunchy jabs about the pope.

And he didn't stop there. While joking that John Boehner was the bouncer of "Club Congress," Trevor let this bomb drop. (Video via C-SPAN)

And then, this happened.

"It's like crack telling meth that it's not addictive enough. 'Yo, man, you got to step your game up, Crystal. You make teeth fall out, big deal. I took down Whitney Houston,'" said Trevor.

As you probably already guessed, not everyone was too happy with Trevor's, uh, off-color humor.

As a writer for Time put it, "The moments that didn’t talk about Stewart were stripped of any real point-of-view. Noah was erratically scathing at times and utterly toothless at others."

Still, others think Noah has potential, despite his rocky first attempt.

Deadspin dubbed his opening night "okay," saying, "Noah’s sweet-awkward newness aside, nothing tonight is destined to go viral, but maybe that’s for the best."

Guess we'll have to wait and see how Trevor fares in Jon Stewart's shoes after some practice.