Trees Could Save More Than 850 Lives Each Year 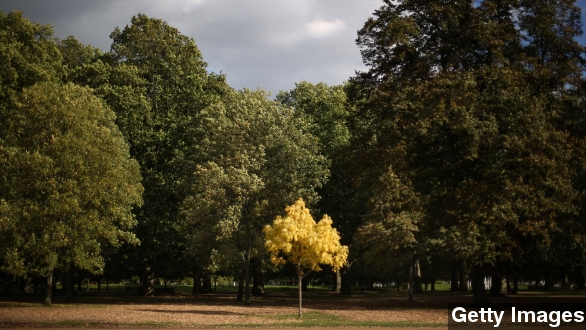 SMS
Trees Could Save More Than 850 Lives Each Year

By Jake Godin
July 27, 2014
A national study conducted by the USDA Forest Service found that trees collectively save more than 850 lives on an annual basis.
SHOW TRANSCRIPT

The next time you walk by a tree, you might be passing one that's saved someone's life...well, sort of. (Via Getty Images)

​​A new study published by the USDA Forest Services found that trees save more than 850 lives a year and prevent something around 670,000 incidences of acute respiratory symptoms.

So it's basically the exact opposite of the plants in M. Night Shyamalan's "The Happening" that release a deadly neurotoxin to kill humans. This study suggests trees have a much more positive impact.

The ​U.S. Forest Service's Northern Reserach Station released a statement saying their study is unique in the fact that it "directly links the removal of air pollution with improved human health effects and associated health values."​

The study looked at four different pollutants — nitrogen dioxide, ozone, sulfur dioxide, and small particles like ash. Trees helped reduce these pollutants for an average air quality improvement of less than one percent.

Although that doesn't sound like much, PhysOrg notes that the impacts are "substantial" with researchers placing the value to human health at somewhere around $7 billion per year nationwide.

The study found these effects are especially important in urban areas, with one scientist saying: “With more than 80 percent of Americans living in urban area [sic], this research underscores how truly essential urban forests are to people across the nation." (Via Getty Images)

But while the study concentrated on the positive effects of trees, it does make mention of some possible negative effects such as altering power plant energy use, reducing wind speeds resulting in increased pollution in some places, and emitting trace amounts of their own pollutants.