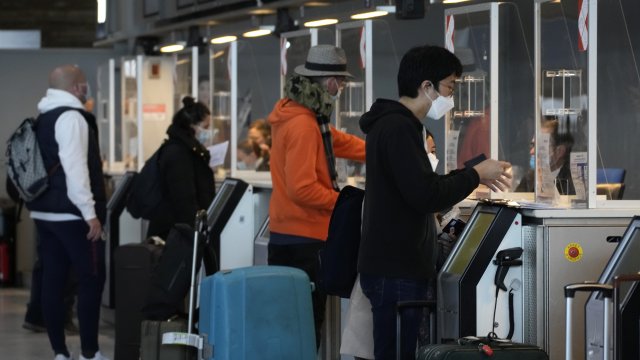 SMS
Some Travelers Stay Cautious As U.S. Reopens Borders
By Newsy Staff
By Newsy Staff
November 8, 2021
Tourists are returning to American cities, and families are reuniting after months of separation.
SHOW TRANSCRIPT

After a 20-month ban, it's takeoff for international travel to the U.S., allowing tourists to return to American cities and families to reunite after months of separation.

Barbara Jansen from Belgium is preparing to see her grandson in Boston for the first time since October 2019.

"I had a ticket for Boston, April 2020, but it was already lockdown," Jansen said. "So I waited and waited until now. The moment he said we're going to reopen the borders I booked a ticket."

It's an emotional reunion for some, but others still have longer to wait.

Laura Legierse lives in Leuven, Belgium. Her boyfriend, Ryan, is nearly 4,000 miles away in Ohio, and she won't be traveling until the end of the month.

"It's so difficult not to be with someone you really love," Legierse said. "Of course we talk every day for hours, but not holding or being with the person, it really hurts."

There are also fears that rising case COVID-19 numbers in Belgium could have an impact.

Laura fears the borders might close again if travel from Belgium is deemed to be unsafe by U.S. authorities.

"We had a warning from the U.S. that there's concern about case numbers in Belgium," Legierse said. "Joe Biden told U.S. travelers not to travel there. I'm worried it could have an impact."

New rules are replacing the ban originally introduced by former President Trump in March 2020 and extended by President Biden.

Now there's a slew of new entry requirements that'll need to be verified by airlines before you travel, including proof of COVID vaccination and a negative COVID test. Airlines are warning that busier airports and bottlenecks are inevitable.

Many of the flights heading to the U.S. from European airports have been full, and a spike in passenger numbers is expected to continue in the run-up to Christmas.