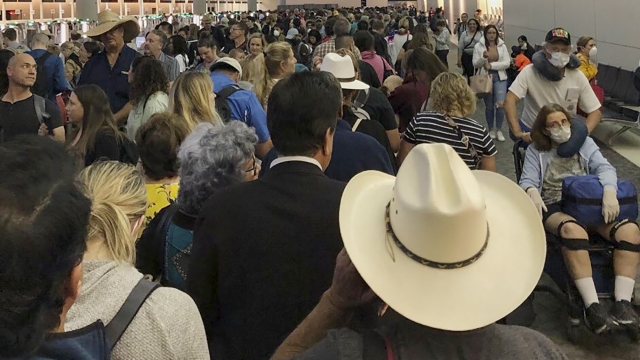 SMS
Travelers Flying Into U.S. Met With Long Lines For Medical Screenings
By LeeAnne Lowry
By LeeAnne Lowry
March 15, 2020
The screenings are part of an effort to slow the spread of the coronavirus.
SHOW TRANSCRIPT

Travelers flying into U.S. airports from Europe Saturday night were met with long lines for newly-required medical screenings for the coronavirus.

President Donald Trump announced the screenings Friday as part of the effort to slow the spread of the virus. The Department of Homeland Security says the screenings take about a minute per person. They reportedly include officials asking about possible symptoms and in some cases having temperatures taken.

But wait times were reportedly anywhere between four and eight hours. Sen. Tammy Duckworth of Illinois called the crowded conditions "exactly the opposite of what we need to do to prevent the spread of #COVID19." Using profanity, Illinois Governor J.B. Pritzker tweeted that the Trump administration needs to get the situation under control.

A Johns Hopkins University virus tracker says there are almost 3,000 confirmed cases in the U.S. and 12 people have recovered. Fifty-seven have died.

The Trump Administration has also expanded a travel ban to include foreign nationals from the U.K. and Ireland beginning Monday at midnight. That's on top of a month-long travel ban on most of Europe announced earlier.