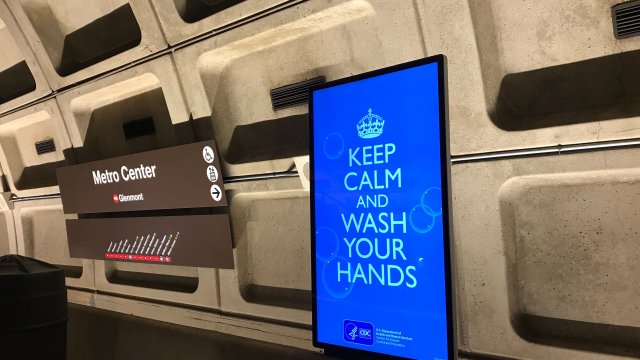 BART in San Francisco is among authorities calling for help from all levels of government; ridership is down 89% in the Bay Area.

New York City's transit system, the busiest in the country, is reporting a "severe impact" to ridership and operations.

And the nation's capital is reporting plunging ridership on Metro.

Michelle Mitchell is thankful the trains are running. They're the only way she can still get to her government job in downtown Washington.

"When people get on, there's a lot of space between us," Mitchell said. "People actually do not get close to someone. If someone coughs, I definitely get up and walk away."

Six feet of social distancing on buses is almost impossible.

Starting this week, passengers on Washington Metro buses now must board buses in the back to avoid coming too close to bus drivers up front.

Crews in New York are disinfecting trains and buses every 72 hours.

A similar deep-clean routine is underway for the Los Angeles Metro, which plans to install on-board sanitizing stations.

Despite the financial pain, officials are still urging people to consider other means of travel if they must go out, reserving public transit for those who have no choice and still really need it.

"Transit is doing everything it can to get people places they need to go," said Polly Hanson at the American Public Transit Association. "We can't forget that there is a community of folks who have no other way to get to essential services."