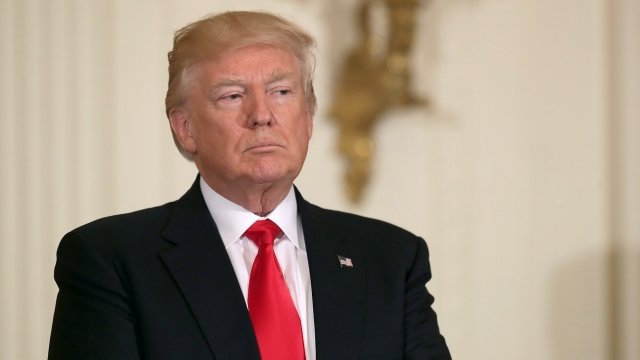 President Donald Trump's Twitter use has resulted in another lawsuit against him. This time it's over his tweets about prohibiting transgender people from serving in the military.

In a series of tweets last month, Trump said the military should focus on "decisive and overwhelming victory" and not the "tremendous medical costs and disruption" he says transgender service members would entail.

The five plaintiffs are not identified in the lawsuit, but it reveals they serve in the U.S. Army, Air Force and Coast Guard.

The lawsuit argues Trump's proposed ban is unconstitutional because it denies transgender members of the military both due process and equal protection.

But despite Trump's tweets, the military's "transgender policy" has not changed yet.

Head Of Coast Guard 'Will Not Break Faith' With Transgender Personnel

Adm. Paul Zukunft said Tuesday he will continue to support transgender service members under his command.

Chairman of the Joint Chiefs of Staff Marine Corps Gen. Joseph Dunford told top military leaders back in July that the policy would remain as is until the White House issued formal guidance to the secretary of defense.

As of Wednesday, the Defense Department still had not received any official word from the White House, a Pentagon spokesman told CNN.

"Trump's directive to exclude transgender people from military service has created a tidal wave of harms that have already been felt throughout our armed services. Transgender service members have been blindsided by this shift and are scrambling to deal with what it means for their futures and their families," National Center for Lesbian Rights' legal director Shannon Minter said in a statement on the lawsuit. NCLR and GLBTQ Legal Advocates & Defenders are the two organizations that filed the lawsuit.

Along with Trump and Dunford, Secretary of Defense Jim Mattis and other national security officials are named in the lawsuit.

The plaintiffs want the court to prevent Trump from ever implementing the ban.

It's unknown exactly how many transgender people are currently serving in the military, but estimates range from 4,000 to more than 15,000.