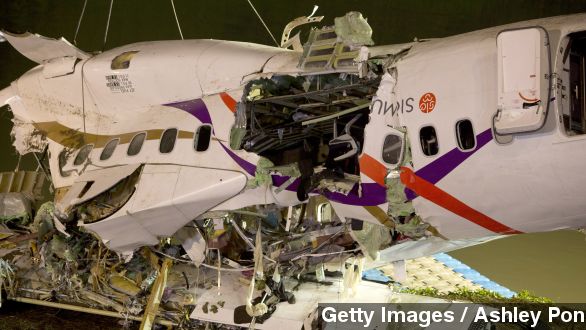 It's something no one expected to see: A plane seemingly falling from the sky and clipping a bridge before plunging into a river in Taiwan.

"A flameout simply means that the flame in the combustion chamber has gone out and the combustion stops. ... It missed apartment blocks and roads by just meters," a Sky News reporter said.

But black box data reveals there actually wasn't a flameout on TransAsia Flight GE235. BBC reports the right engine was somehow in idle mode. The pilot reportedly shut off the left engine as well, then couldn't get either restarted.

According to Taiwan's Aviation Safety Council, the plane should have been able to fly with only one engine. The black box data did suggest the engines failed to produce enough thrust within the first two minutes of the flight, and the plane plummeted.

At least 35 people died in the crash. A more thorough report is expected within 30 days.

The biggest mystery still seems to be why the left engine was shut off. Regardless, The Guardian says the pilot is being called a hero for steering between apartment buildings.

He was reportedly found dead in the cockpit still holding the flight's controls. The co-pilot also died.

This crash follows other recent Asian air disasters, like AirAsia Flight QZ8501, which crashed Dec. 28 on its way to Singapore. The search area for that wreckage was recently expanded.