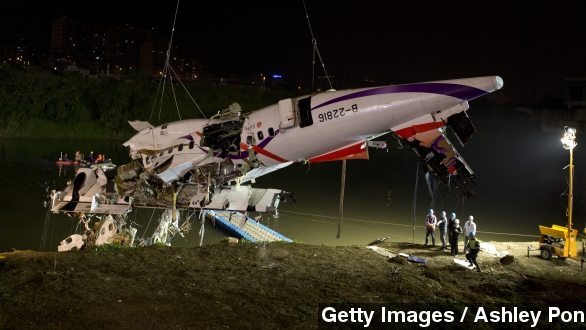 TransAsia has canceled a total of 122 flights since the accident. The BBC reports TransAsia is re-testing the 71 pilots who fly its ATR turboprop aircraft. Taiwan's Civil Aeronautics Administration says the pilots will attend four days of mandatory training.

Forty of the 52 people on board died when Flight 235's engine reportedly malfunctioned. The plane crashed into the Keelung River in Taipei.

Taiwan's Aviation Safety Council made a preliminary report based on data from the black boxes. The flight information suggests the pilot cut power to the remaining engine just before the crash. (Video via Sky News)

"The flight data recorder actually shows that that happened. The left engine was actually shut down. So at this point, in that short flight, there was no thrust from either engine," said CNN's David Molko.

Rescue workers have retrieved most of the wreckage for analysis at a nearby airport. The search for survivors continues.

"The divers have formed a line; and holding hands, they’re walking slowly across the river to try to see if they can hit any of the bodies. Now, they no longer believe they can find any survivors since it’s been so many days," said the BBC's Cindy Sui.

Authorities say it could take as much as a year to complete a full investigation into the circumstances of the crash.