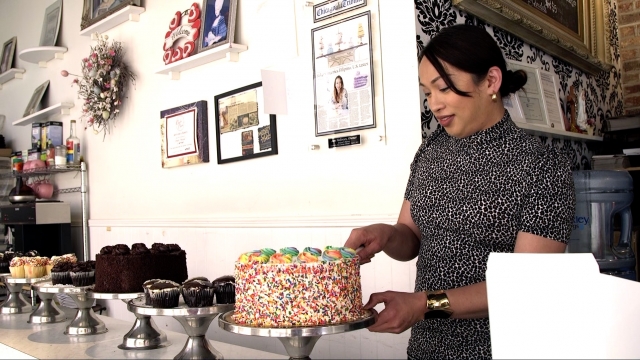 SMS
Trans Bakery Owner Serves Up Desserts For All During Pride Month
By Cat Sandoval
By Cat Sandoval
June 17, 2021
Chicago's Jennivee's bakery is booming, even during the pandemic, thanks to community support.
SHOW TRANSCRIPT

When some bakeries refused to make wedding cakes for same-sex couples, self-taught Chicago baker Jenni Vee decided to open up her own bakeshop.

"Being a trans woman and obviously a member of the community, I wanted to create a business that welcomes everyone," said Vee.

Now five years later, Jennivee’s Bakery is serving up eclectic sweets. ... from its best seller Purple Velvet cupcakes—an ube flavor and a nod to Vee's Filipino heritage — to its Rainbow Pride cake, an explosion of colors.

"It's always very exciting. During Pride Month, we're always kicking out like tons of these guys. We have to keep up," said  cake artist and decorator Connor Caldwell.

"Regardless of your background, your sexuality, your gender. We wanted to make people feel welcome when they come into our store," added Vee.

She says her business survived the pandemic not just because people were craving that sweet comfort food, but also because of support from the LGBTQ and the Asian American community.

"We've been so lucky and fortunate to have not only survived, but thrived," said Vee.

Newsy Reporter, Cat Sandoval asked, "As a trans business owner what obstacles do you face?"

"Apart from the usual challenges of starting and running a business there are people that will not  support my business because I'm trans and because it's an LGBTQ-run business. I do get some hate comments," said Vee.

But Vee doesn't let that faze her. She focuses on the good: repeat customers and a supportive community. Customers like Marisol Martinez who is back for another cake order. "Not just the cake but also the people who work here, they're very nice. They're very friendly," she said.

A longtime customer, Donna Gregory chimed, "I don't go anywhere else, let's put it that way, because I don't like the cakes anywhere else."

During this pandemic, the Human Rights Campaign poll found LGBTQ people are more likely to have work hours reduced than their straight counterparts. They're also more likely to experience poverty, with trans people facing the highest rates.  . … For Vee, owning a bakeshop is not just a dream but a way to give back. She offers job opportunities, trainings or internships for LGBTQ workers.

" It's important because I think that it's a struggle still nowadays for LGBTQ youth, a lot of them are victims of poverty and lack of support and lack of access," said Vee.

Vee's next dream is to open multiple bakeshops around the country, maybe even branch out in Canada and the Philippines. She said, "to me, the dream never ends. I just keep on dreaming for the next best thing."