Trailer In The Hamptons Listed For $1.1 Million 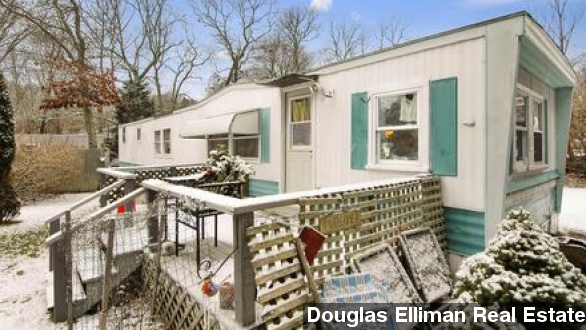 SMS
Trailer In The Hamptons Listed For $1.1 Million
By Katherine Biek
By Katherine Biek
February 9, 2015
A trailer located in East Hampton, New York, is on the market for $1.1 million. The steep price tag reflects the property's coveted location.
SHOW TRANSCRIPT

It's why this run-down trailer in the Hamptons is on the market for $1.1 million.

No, your ears aren't deceiving you. I really did just say "trailer."

The 400-square-foot space boasts one bedroom and one bathroom.

This property wasn't always this expensive.

The New York Post talked to Richard Lester, the current owner. He said he originally bought the land — which is less than half an acre — in 1956 for just $300.

Talk about inflation. But the $1.1 million price tag sort of makes sense when you look at the prices nearby homes have sold for.

Like the five-bedroom house that sold for just under $4 million in the summer of 2014.

And this 8,000-square-foot stunner, which is currently being built, is on the market for almost $16 million.

Celebrities like Jerry Seinfeld and Martha Stewart also have homes in the area.

And the trailer's price is actually lower than the average listing price in the Hamptons, which is now around $1.7 million, according to CNBC.

If trailers really aren't your thing, though, just do as the listing says and "Use it as it is now, while you plan for your 4,000 square foot new house with [a] 20 foot x 50 foot swimming pool."