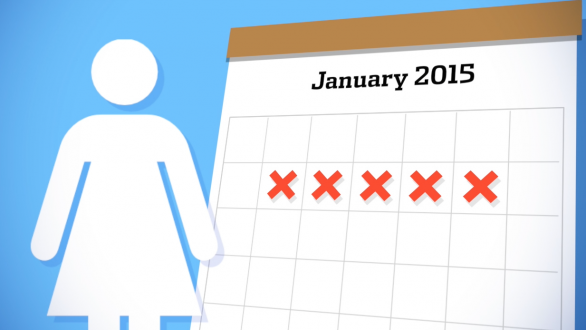 SMS
Traditional Family Planning Methods Gaining Awareness
By Madison Burke
By Madison Burke
January 8, 2015
Fertility Awareness Methods have been getting more attention in the media, which often portrays it as a hormone-free alternative to birth control.
SHOW TRANSCRIPT

Over the past few years we have seen more awareness about traditional forms of family planning — causing some women ditch their birth control pills.

Fertility Awareness Methods, or FAM, are pretty much the old-fashioned ways of birth control, made a whole lot easier by modern technology.

They involve a woman watching her body for signs she might be ovulating by taking her temperature and observing her bodily fluids. Around ovulation, the woman abstains from sex or uses other forms of birth control — like condoms.

There are all sorts of apps and websites available to help keep track.

One possible explanation for growing awareness of FAM? Public service videos like this one:

"Are you looking for birth control that doesn't have any side effects, is inexpensive and helps you understand your body's cycles?"

And not putting chemicals in your body is a driving force behind many women's decision to use the method.

Public health expert and FAM advocate Toni Weschler explains, "Women from all over the world have been drawn to FAM simply because it is free of the chemicals associated with hormonal methods such as the Pill."

In a 2009 study by the University of Iowa, 1 in 5 women reported interest in using FAM after receiving positive information about it.

FAM is also often promoted by the Catholic church and other religious organizations that disapprove of some other forms of birth control.

But there's just one very obvious problem with these methods. With typical use, it's less effective than most other forms of birth control listed by the Centers for Disease Control and Prevention.

The CDC says the typical failure rate of FAM is about 24 percent. That's considerably greater than the failure rate of the pill, which is at about 9 percent — again, when common misuse is factored in.

OB-GYN Nathaniel DeNicola told CNN, "Even one day (miscalculated) can result in pregnancy."

Experts say women who have the best chance of not getting pregnant through FAM have an average menstrual cycle between 28 and 32 days.