Tracy Morgan Opens Up About 2014 Crash 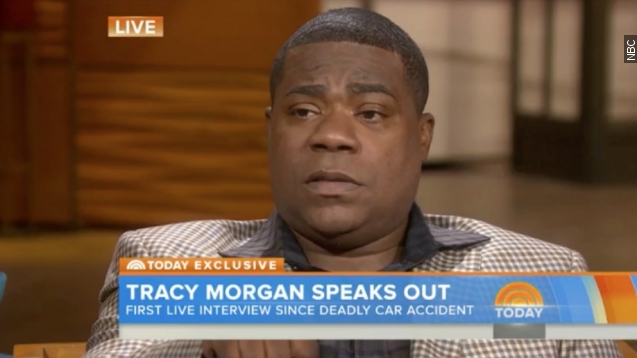 Comedian Tracy Morgan spoke for the first time Monday about the 2014 crash that put him in a coma and took the life of his good friend.

"Bones heal. The loss of my friend will never heal," Morgan said on the "Today" show.

Morgan was critically injured on June 7, 2014, when the limousine he was riding in was hit by a Wal-Mart tractor-trailer in New Jersey.

The National Transportation Safety Board later reported the driver of the Wal-Mart truck was going more than 20 miles over the speed limit at the time of the accident.

Morgan was in a coma for two weeks after the accident. His friend and mentor, James McNair, who was also in the limo, didn't survive the crash. (Video via YouTube / unclejimmymack)

Speaking to Matt Lauer on Monday, Morgan also talked about how thankful he was that his fiancee, Megan Wollover, and his children weren't traveling with him that night like they usually do.

Wal-Mart settled a lawsuit with Morgan at the end of May for an undisclosed amount of money. That was after the retailer settled a wrongful death lawsuit brought against it by McNair's family in January.

In the interview, Morgan said he was happy Wal-Mart "took care of Jimmy Mack's family." To hear more of Morgan's interview, head over to NBC's website.