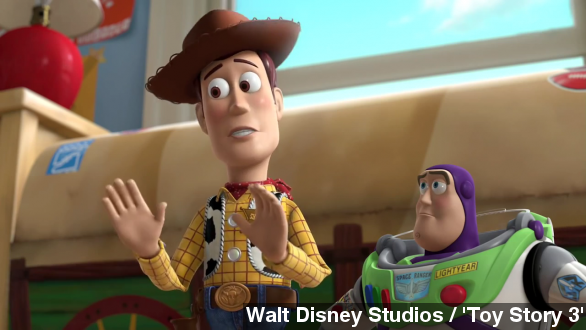 SMS
'Toy Story 4' Is Coming, But Can It Live Up To 'TS3'?
By Lauren Zima
By Lauren Zima
November 6, 2014
In a surprise announcement, Disney revealed "Toy Story 4" is coming. Makes sense for the company, but how can it live up to the success of "TS3"?
SHOW TRANSCRIPT

To a fourth movie, and beyond!

Yes — Disney just announced “Toy Story 4.”  The news is a surprise — in 2010, ”Toy Story 3” ended with a script that pretty much wrapped things up — I mean, Andy went to college.

WOODY: “We all knew this day was coming.”

But chairman Bob Iger said Thursday a fourth movie is coming in June 2017. So, maybe Andy is working? … Or facing the plight of a generation that has difficulty getting employed post-college? OK, neither here nor there.

But, what’s the motivator for Disney here? Well, “Toy Story 3” was the highest-grossing animated film of all time until “Frozen” beat it last year ...

And its critical acclaim was immense. For some time, the movie sat with a 100 percent approval rating on Rotten Tomatoes, until film critic Armond White infamously became a lone naysayer.

So where could the story go from here? The same Pixar guys who have been making the “Toy Story” movies since 1995 came up with the idea. Director John Lasseter said in a statement...

“We don’t want to do anything with [these characters] unless it lives up to or surpasses what’s gone before.  ... When Andrew, Pete, Lee and I came up with this new idea, I just could not stop thinking about it. It was so exciting to me, I knew we had to make this movie.”

Big promises. One unique spin for this one though —

No official word on whether original voices Tom Hanks and Tim Allen will return. But we’re hoping...