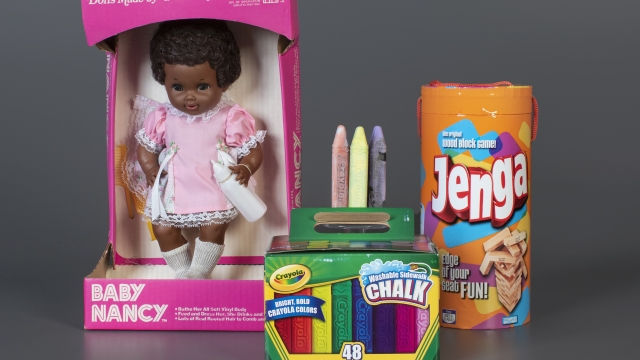 Whether you're a child or a child at heart, toys are an important part of American culture — like baseball or rock 'n' roll. And just like those two industries, toys have their very own hall of fame.

Christopher Bensch, chief curator at the Strong National Museum of Play: "It started in 1998 to recognize classic toys that have had enduring impact on American culture."

The Strong National Museum of Play inducts new toys into its National Toy Hall of Fame every year. Its past honorees include popular brands like Barbie, G.I. Joe and Magic The Gathering, as well as non-branded toys like sticks, balls, or my cats' favorite, cardboard boxes.

Toys are chosen by experts and curators for their longevity, icon status, creativity and innovation. And this year's inductees are sidewalk chalk, Jenga and one of the biggest trailblazers in the toy industry: Baby Nancy.

Bensch: "Baby Nancy, of this year's three inductees, is definitely the least well known. But she was such an important breakthrough in 1968, when she came out as really the first Black baby doll that was modeled on actual Black children, rather than being a mold that was made for White dolls, and just with extra coloration in it."

Baby Nancy broke major ground in 1968 as the very first doll created specifically for Black girls. Developed and manufactured by the community-owned company Shindana Toys, the doll was designed with natural hair and "ethnically correct" facial features. Selling nationwide, Baby Nancy showed the toy industry how much demand there was for representation.

Bensch: "Really starting a trend — that we're still not complete with — but representing kids so that they can see themselves in their toys, especially things like dolls and action figures."