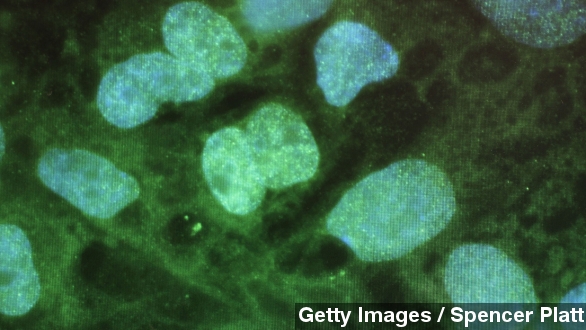 The team genetically engineereed stem cells so they can produce and discharge tumor-destroying toxins.

Stems cells are body cells that have the ability to develop into many different cell types. These cells are often used by scientists in regenerative or reparative medicine because of their potential for treating diseases, although more work needs to be done to fully understand them. (Video via YouTube / bmedinago)

Researchers tried out the improved stem cells on mice that had recently had tumors removed. They put a biodegradable gel full of stem cells on the former tumor site and found it was able to destroy remaining cancer cells.

Besides the obvious — killing cancer cells — this research is significant in two ways: first, by using the gel, the research team was able to effectively deliver the stem cells to the correct area — something previous teams had not been able to do by injecting cells directly. (Video via YouTube /  Caring Medical and Rehabilitation Services)

Second, the stems cells would normally be killed by the cancer-destroying toxins they emit, but this team created toxin-resistant cells for much longer lasting results.

Head researcher Khalid Shah said, "We do see the toxins kill the cancer cells and eventually prolonging the survival in animal models of resected brain tumors."

And Beta Wired reports cancer specialists in this field of regenerative medicine are in "the beginning of a new wave of treatments for cancer."

Researchers are currently pursuing FDA approval to bring this approach to a clinical trial. The study can be found in the journal STEM CELLS.