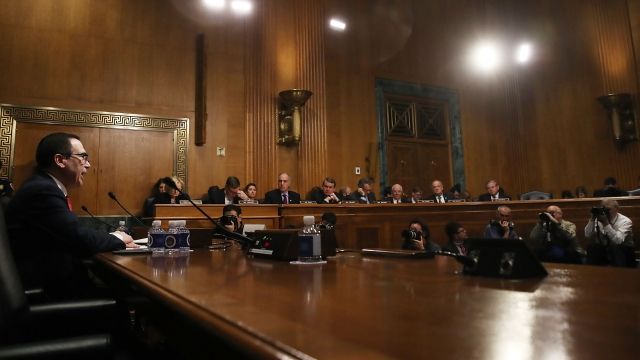 Democratic members of the Senate Committee on Finance pushed the nominee on his involvement in the 2008 subprime mortgage crisis.

"While Mr. Mnuchin was CEO, the bank proved it could put more vulnerable people on the street faster than just about anybody else around," Sen. Ron Wyden said in his opening remarks.

Mnuchin's company founded OneWest after taking over IndyMac — a bank that was a leading mortgage lender before the housing crisis.

In 2009, Mnuchin's group bought IndyMac for over a billion dollars from the FDIC.

Democrats say that OneWest profited during the 2008 crash.

"A 90-year-old Lakeland woman was foreclosed on because of a 27-cent payment error. ... This stuff is happening that is very unfair to little people. Why?" asked Sen. Bill Nelson.

Mnuchin seemed ready to take on those accusations and pushed back.

"Let me be clear, my group had nothing to do with the creation of the risky loans in the IndyMac loan portfolios. When we bought the bank, we assumed these bad loans which had originated from previous management," Mnuchin told senators.

Instead, he said government regulations restricted his ability to modify those bad loans, but he said he'd change those rules as treasury secretary. And he noted that when his group bought out the bank they saved thousands of jobs.

For their part, Republicans on the committee seemed to agree that Mnuchin and his group did nothing wrong.

"I don't believe anyone can argue that Mr. Mnuchin is unqualified for this position. So I hope we don't have those type of stupid arguments," said Finance Committee Chair Orrin Hatch.