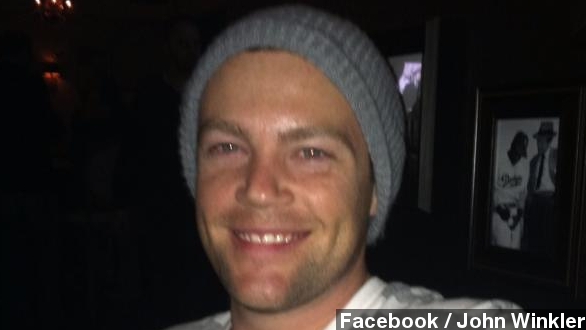 By Christine Slusser
April 11, 2014
John Winkler, a "Tosh.0" producer, was tragically shot and killed by police responding to a hostage situation in an apartment building.
SHOW TRANSCRIPT

"Monday, he was shot by three deputies while attempting to rescue a victim in a standoff."

And reports are conflicted on what exactly what went down. It's unclear whether 30-year-old Winkler became a hostage in the situation as well, already was one to begin with or became one after rushing in to help.

The Los Angeles Times says 27-year-old Alexander McDonald held two other men hostage, and Winkler happened upon the situation after he went in to try and help. When deputies arrived, McDonald "began stabbing the men and fighting with them."

However, The Wrap quotes the Sheriff's Department as saying Winkler and a friend were already hanging out in the apartment complex when the attack occurred, and upon exiting the building, Winkler was mistaken for McDonald.

"John Winkler went into a neighbor's apartment to save friends being held hostage. Deputies saw Winkler running out behind the stabbing victim. California officers thought he was the suspect and opened fire, killing him." (Via WBOC)

Again, we aren't sure whether Winkler was already in the apartment when the alleged stabbing took place, or whether he raced in to help. E! reports Winkler's description matched the suspect McDonald, which added to the confusion.

"​McDonald ... has been charged with murder, two counts of attempted murder and one count of torture in connection with what allegedly went down inside that apartment building. McDonald pleaded not guilty."

The Los Angeles Times notes one of Winkler's buddies said he was friends with two people being held hostage, and according to him, he was trying to help them.

"The Sheriff’s Department’s initial news release the day after the shooting made no mention of the mistaken identity and said the two people shot had 'aggressed the deputies.'"

Winkler recently moved to LA from Washington state hoping to land work in entertainment TV. KING spoke with one of Winkler's best friends, who was obviously emotional about the loss of his friend.

TREVOR JESS: "And it hasn't sunk in until now probably. I'm still in shock, total shock."

And even more people were mourning on Winkler's Facebook page, saying he was the best and he always put others first.

No charges have been filed against the three deputies involved in the shooting. They have been removed from patrol, but are expected to return to full duty. All three are longtime officers of the department.