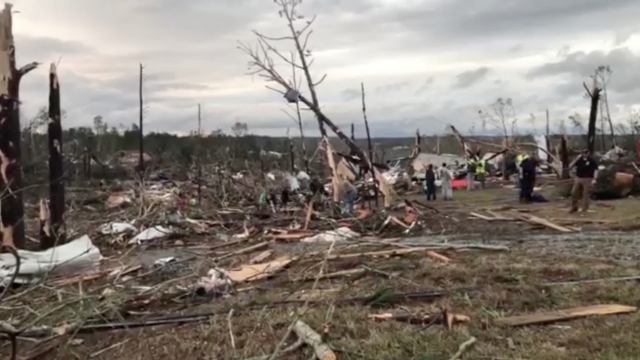 A series of damaging tornadoes swept through the southern part of the country Sunday, killing at least 23 people in one Alabama county.

The National Weather Service said the first tornado that struck the area Sunday afternoon had at least an EF-3 rating, meaning wind speeds were anywhere between 136 to 165 miles per hour. It's expected to give another assessment after survey teams take a more thorough look at the damage Monday.

Another tornado reportedly hit within an hour of the first, according to CNN. The twisters caused severe destruction, even wiping some homes from their slabs.

Alabama Gov. Kay Ivey extended a previous state of emergency declaration due to the severe storm system, which later moved across parts of Georgia, South Carolina and Florida.

There were no immediate reports of deaths from the weather in those states. Though Georgia officials said at least six people were injured after a tornado damaged multiple buildings in a rural area about 80 miles south of Atlanta.