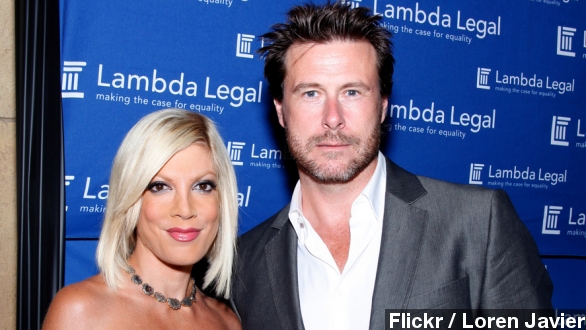 In an exclusive statement to People, McDermott says: "I am truly sorry for the mistakes I have made and for the pain I've caused my family. I take full responsibility for my actions and have voluntarily checked myself into a treatment center to address some health and personal issues."

The reality star goes on to say he's thankful to be receiving help for the sake of his wife and their four young children. It's unclear exactly what he's receiving treatment for. (Via Oxygen / "Tori & Dean")

But of course, this big step comes just a few weeks after rumors swirled of infidelity on McDermott's part, sparked by this cover story in Us Weekly.

The magazine reported that he'd slept with a woman in early December in Canada while promoting "Chopped Canada," a show he's hosting. (Via Global News)

Despite the cheating rumors and gossip about the family's troubled finances, Spelling has been posting Christmas and New Year's Eve photos of a happy family on her blog. (Via Editorial by Tori Spelling)

According to People, McDermott will be able to leave the rehab program regularly to visit his children at their home. Spelling hasn't yet made an official comment. The two married in 2006.