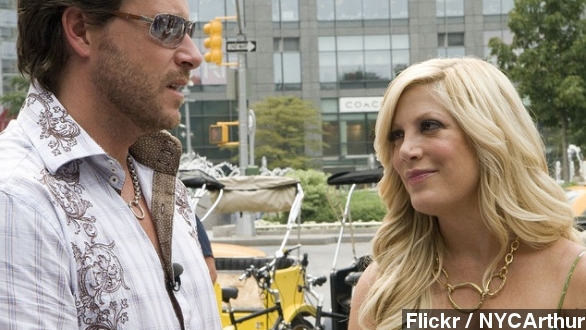 By Lauren Zima
April 28, 2014
The actress and reality start was reportedly hospitalized for almost a week; reasons why are unclear, but outlets are speculating.
SHOW TRANSCRIPT

Tori Spelling was recently hospitalized for several days, according to reports.

Right now it's unclear exactly why, but UsWeekly, for one, cites her ongoing marital problems. Less than a week ago, those problems began airing on Lifetime as the focus of her new reality show, "True Tori."

Us writes, "It looks like the combined pressure of her marriage and filming a reality series has gotten to Tori Spelling."

The series goes as far as to film Spelling and her husband, Dean McDermott, in therapy together discussing him cheating on her.

The news that McDermott had cheated on his wife of seven years broke in December, also from UsWeekly. In January he entered rehab, reportedly for sex addiction.

And rumors began to fly that there had been multiple indiscretions. (Via Hollywood Life)

As for Spelling's hospitalization, E! is reporting she was in a facility for at least six days, but went home Saturday. The outlet says McDermott was by her side constantly during the stay.

Spelling spoke out once before about another major hospitalization; when pregnant with her fourth child she suffered from placenta previa. Spelling has said that she's determined to work on their marriage for the sake of their four children. So far, no comment from Spelling or McDermott on her hospitalization.